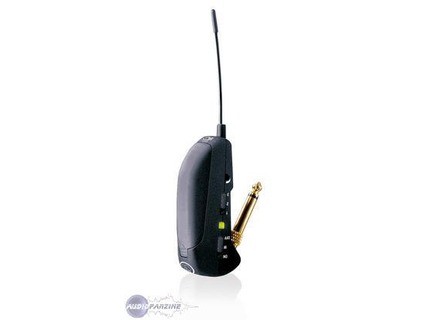 themaddog's review"Great! Too bad it's illegal for me to use now"

AKG GB-40 Flexx
4
This is a wireless transmitter for guitar - I remember at the time the nickname was the Guitar Bug.

This is the only wireless I've ever owned, and I purchased it because it was the smallest transmitter available. I didn't want a big bulky pager sized device connected to my strap because, when I played live, I would throw my guitar around my neck and do other tricks. I wanted to be able to go wireless so I could run around more easily without having to worry where the slack guitar cable was going.

The quality of the transmission/reception to the guitar amplifier is good, but understand that playing through a wireless will always degrade the quality of the tone somewhat, particularly in the area of sustain. There are squelch and volume controls on the receiver to fiddle around with, but it takes a little getting used to playing with a slightly duller tone. Changing the EQ and presence controls on the amplifier can help in achieving the tone that's been lost through the wireless set.

Another benefit of using a wireless guitar is that it cuts down on the risk of electrocution. Some clubs have funky power, or don't have all the lines grounded properly, so playing a corded guitar and touching the microphone (by the hand or with wet lips) can produce a shocking surprise. Playing with a wireless set directly takes out one major component of this equation as the guitar is not physically connected by any cables to the amplifier, cutting down on this risk of grounding fiascos.

I would save my wireless set for some shows... I've always been of the mentality that with the less gear I use, the less likely equipment is to fail. But, since the time I've bought it, FCC rules have changed and it is illegal to use my wireless set as it broadcasts on a banned channel. That being said, it still works (just don't ask me how I know this. If someone out there hears a ripping heavy metal guitar solos through his TV set on occasion, I'm sorry).

If I ever go wireless again, I might check out one of the Line 6 models, especially if they're able to make them any smaller.
Did you find this review helpful?yesno
»

Published on 01/12/09
AKG announced the introduction of the GB 40 Flexx GuitarBug wireless transmitter.