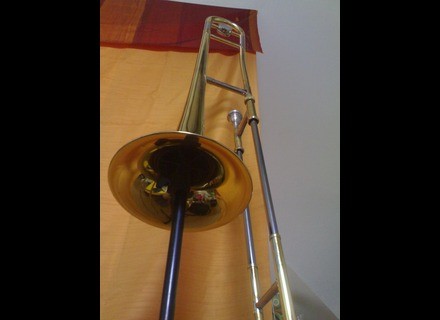 YSL-354, Trombone from Yamaha in the YSL series.

Yamaha YSL-354
What thing do you like most/least about it?
I can't say I think this is the greatest trombone out there. It's just a good beginner trombone. It's easier to hold than some better sounding ones, because the weight distribution is more even. This might be to the detriment of the sound, but for younger players it's more important that they can actually hold it! I don't like how little expression you can get out of it, and I really don't like the general tone really. But I have fond memories of it, so I guess I don't mind it too much. I feel like the slide, even when well lubricated, just isn't as easy to maneuver as a better trombone's.

What is your opinion about the value for the price?
This is arguably the best thing about the trombone. It's one of the cheaper models out there, and my high school purchased a ton of them. Definitely a good investment for a beginner, since it will generally continue to sound for as long as they're playing it, until they reach a point of maturity where they remain interested enough to get another one.

Knowing what you know now, would you make the same choice?...
I would probably go with something a little better than this if I had to buy a trombone again in the near future, but again, I would recommend it to anyone who's trying to learn; it served me well for over four years, and I never got too frustrated with it.

Precision and quality of the sound?
This trombone is good, but it's not recommended for a really experienced player. I think anyone who's good enough at Trombone will realize this. I remember having a lot of trouble with it buzzing and getting irritating after awhile. That being said, it's mostly up to the player when it comes to the instruments; with a good player, it sounds good. It doesn't have the richest or smoothest sound out there, but it's good enough for me.

Yamaha YSL-354
4
After renting a 606 King for a year, I bought this trombone and I immediately noticed an improvement. More specific slides, fuller sound, better response. I play with a classical ensemble, a brass band and a marching band.

It is well to start for several reasons.
Its weight is rather light and well balanced. It is right on the entire range. Answer it well. He forgives notes that do not come out (or not good) on higher end models. It does not require a large breath.

After testing other clips (including a King Legend S 2B, high-end) and with time, the main flaw that I found is the lack of dynamics.

Value for money very good, I like this brand for a long time (bass, piano).
Did you find this review helpful?yesno
»

flolecannibal's review (This content has been automatically translated from French)

Yamaha YSL-354
5
I use it for 8 years both in the course, repeating in concert, to play traditional ska, jazz is perfect ..
Very good paper clip to begin and develop .. The only negative, can be the heating time (subjectif! !!)..
Having used other I find it perfect for small budjet or indescits ..