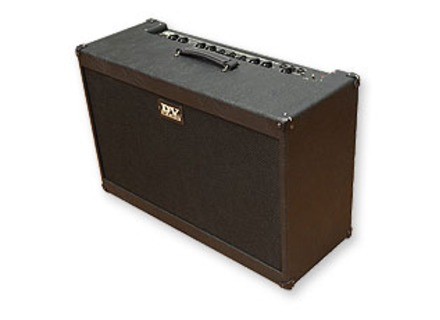 Bison_Ravi's review (This content has been automatically translated from French)" Excellent .... just perfect!"

DV Mark DV40 212
5
Amp lamps, two 12AX7 preamp in, 2 EL34 and 12AX7 in a power.
The connection is Compete, an effects loop, an area for active pickups and a standard input, a dual footswitch for channel 1 or 2 and for the boost, 4/8/16 ohm speaker outputs.
Power is 40W in pentode, 15W in triode, but with a little power setting. It is not a simple attenuator, because you start to finish in Class A and AB in the volume does not change depending on its position, it only plays on the Master.
So two channels, a Clean and Drive, Boost, Accutronics reverb, EQ (low, medium, low), setting a presence and a "Bright" useful at low power.

The manual is in English but hey, nothing complicated.

This amp is fantastic, this is my third amp and that's it, I found what I needed. I was looking for a "Swiss knife", I know it's all about compromise, but there I am amazed.
I play mostly at home, the kids (0.5 W) and it's almost hard. It happens to have a nice distortion on the Drive channel, enough to play without effects or Nirvana ACDC.
It especially happens to have beautiful cleans, we go to jazz without problems. And playing on the gain, the two channels, Boost, Eq, the attenuator .... is swept virtually all of Hard to Jazz by Funky, Blues, Pop ect ...
And 40W, the power reserve is huge, which can cover a battery Clean.

I've had two days, I tried it in hard head before you buy. I had a Vox AC4, I had to change in depth to become cool. I had a Cornell Plexi that was a big disappointment and I have a Roland for work.
I love this amp, its sounds, and by increasing the power and by switching pentode dynamics is superb.
The value for money is very good (€ 1,200 in stores, on the net € 1,100 € -1,079 in Toto-but hey, I could not see myself trying to shop and buy on the internet ....). The amp is made in Italy, it is very well finished, everything is neat.
Best of all, it is AutoBias and it can receive 6L6, 6V6 and of their variants (KT66. ..). I chose it for that too, to spend his English fenderien to clean, but not even need, it is perfect with its EL34.
Yes I would do this choice without hesitation.