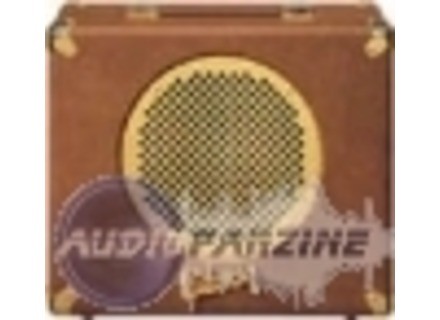 This amp is good for everything but high-gain shredding. I play a lot of blues, CCM, and classic rock. It cleans up great for country twang or warmer clean jazz. My wife says it's too loud in the house, and I rarely turn it up past 3 or 4 at home, even when switched to half power. Three knobs, volume, tone-ish, and reverb. The tone control actually bumps the mids when you roll off the treble. Best setup? Turn it up to where you can still clean it up with your guitar volume pot, hit it with an overdrive pedal when you want it to shout or sing a lead. It likes most pedals, but I tried to get some real shred going with a Metal Zone and was really disappointed. Good chime with single coils, good chunk with humbuckers. I like the amp. A lot. It's a keeper.

Look for a later model: the earlier ones had transformer issues and plastic tube sockets. Since a class A circuit really heats up the tubes, that's a point of failure. The later ones made this side of the pond have ceramic tube sockets and a better cab. I don't have specific info on which serial numbers to look for. Mine is sometimes afflicted with some tube rattle at high volumes. An extension speaker works when re-tubing doesn't smooth it out. I have had the reverb (great sounding spring/tube driven tank) serviced three times in 19 years.

I love the way it looks - black with gold trim and grill. The tone is excellent; cleans are very distinct and wamr or crisp, your choice. The overdrive in 6W mode is excellent, but still too loud for naything but the bandstand. The amp loves pedals, too.

Bottom-rear mounted controls are difficult to adjust, but then again you can just "set it and forget it" with this amp. you really need of them if you plan on using the amp
Did you find this review helpful?yesno
»

Gibson GA 15RV Goldtone
4
Bought the unit used for 500.00 in Omaha, Nebraska at Schmidt Music. I play a lot of blues and this amp had GREAT tone.


As I said, the amp has superb tone and the reverb is as good as any I've heard. Its also touch sensitive and really lets you be very expressive which is obviously very important with the Blues. Its also a very simply built without a lot of bells and whistles which could be a drawback for some. But if you're looking for great tone, its your amp. My overdrive pedal through it makes me want to smoke a cigarette it sounds so good. Don't let the 15 watts fool you either. Those are 15 class A tube watts! It can rock!!!

Its a pricey amp but it is worth it. I just wish they would include the pedal to turn off and on the reverb and not charge me an additional $30.00. I also wish the controls were easier to get to. Maybe on top as opposed to on the back. These are minor complaints and I otherwise love it.

Very well constructed with a good "retro" feel to it. Its a bit heavy but all good things come with a price.

If you crave tone and a no frills amp, this is your girl! It ain't fancy, but it will curl your toes because it sounds so good. If you can find a good used one I would snag it up! They are pricey but are worth it even at the new price if you got the cash. These will be classic amps someday and will be sought after.

It has the most jaw-dropping, heavenly, borderlessly fantastic tone I have ever feasted my ears on. This must be what the inside of Mozart's head sounds like...

It looks great, is well built and has this great smell after it's been cooking for a few minutes.

For some insane reason i have this weird feeling that the handle is going to snap, even though i've never had any signs suggesting it might. Not that this should matter to you in any way...

It's rather on the heavy side. 50 pounds perhaps.

really good. I like that the serial number's been written by hand and you get the name of the one who's quality tested it...

This amp has Tone, reverb, volume and a bright switch. If you're an FX buff you should probably stay away or use a lot f money on effect pedals or something. I just bought a multi effect pedal, but hey...

If you're looking for tone, this is the perfect amp.

This review was originally published on http://www.musicgearreview.com
Did you find this review helpful?yesno
»
Read the 5 user reviews on the Gibson GA 15RV Goldtone »