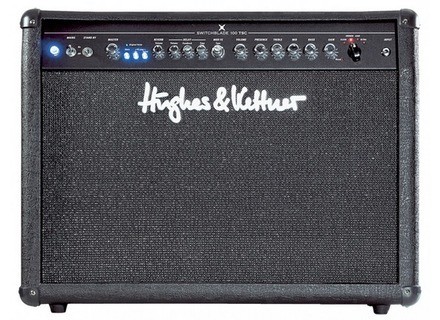 Hughes & Kettner Switchblade 100 TSC Combo
4
This a German company who designs high quality guitar amps for touring musicians and the average consumer. They guitar amps that range from just a few hundred dollars to several thousand. These amps have a loyal following from many varies musical genres.

This amp is a cross between a Triamp and a Coreblade. You get the same channels and features of the Triamp with the voicing, but also the versatility of the Coreblade. What this means is that you have a midi 128 presets that can be store within the amp itself. You also get the effects like delay, modulation and reverb built into the amp. Plus you have TSC technician on board that will bias your amp and also let you known if you are experiencing tube problems.

This is the same amp as the head version but just in a combo. You get all the same great features and tone as the head but a 2x 12 inch speaker combo.


This amp has the tone of the Triamp and the versatility of the Coreblade. So if you need something that covers a lot of ground then this a great amp to start. This combo is going to sound a little different then the head unless you have a mathcing cab with the same speakers. Speakers are like filters and they change the amp's character a bit coming out out o the cab. So if the amp is voiced to those speakers then you have exactly the way is was designed.

This amp has three channels and six modes. Each channel has two different modes of operation. For the clean you can get a nice Fender like clean and click the next mode you'll get a British style clean much like a Marshall plexi. On the second channel you have a crunch channel. The first mode is a classic rock tone from a Marshall style voiced amp. Next you have then a hot rodded tone from a Marshall style amp. This gets you great vinatge classic rock tones for music such as AC/DC or Led Zeppelin. The third and final channel you get over the top gain and distortion. The first mode is a hot rodded British gain for most hard rock and metal. Then to top it all off you have an insane amount of gain for the second mode. This mode is for modern playing or dripped tuning. Great for modern metal and hard rock.

I have seen these amps as low as $1459 for a new one, which is a great price for an amp this versatile. It is a mix of tub and digital so if you can't handle a digital amp the this is a miss for you. I would recommend this amp to anyone who needs a good gigging amp that can get a lot of work in and be extremely versatile for covers songs and a 2-3 hour set list.