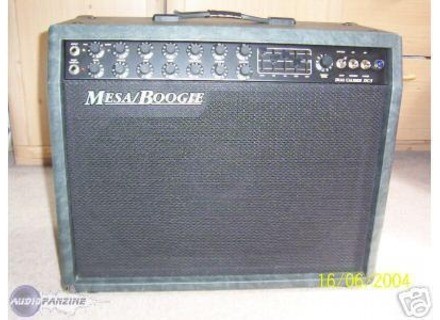 It's very easy to dial in if you know that you have a "hidden" channel by using the gain knob on the clean channel.
The EQ is indispensable to get a good sound. An advice: Take it easy with the BASS pot on the distortion channel, especially if you EQ afterwards, because it loses a lot of energy.
From very clean to very distorted, suitable for JAZZ, BLUES, ROCK, METAL, and beyond that I don't know.

It's great for the different music genres I play.
The sound is crystalline with a single-coil, but becomes VERY DYNAMIC with a good humbukcer.
I play a JAZZ EPIPHONE EMPEROR JOE PASS (Montgomery sound at will) and a LAG IMPERATOR equipped with dual switchable Saymour DUNCANs.
I love all the sounds this amp provides and have NEVER ADDED a distortion pedal (it doesn't need it). On the other hand, I use a FENDER pedalboard on the FX loop for delay chorus.
Digital pedals should not be placed between the guitar and the amp because they distort sound.
True, the amp is powerful, but it sounds fine at "low" volumes (I play in a rehearsal room not in my room).

I've been using this amp for 5 months and everything is great.
I bought a BLACKSTAR at the beginning of the year and I'm very happy. Since MESA is so expensive I never thought I would be able to buy one, but then I bumped into this "barely used" secondhand one.
It was a good deal, because the sound of this amp is timeless and if you take good care of it it can still last many years. Years ago I had a MESA BOOGIE preamp, so I know the brand well. I only regret it being so expensive.
Does it make any sense to talk about value for money with this brand?
I would definitely buy it again. And I also take the opportunity to say that no matter what guitar you use, this amp will do it justice.
Did you find this review helpful?yesno
»

Two channels and a footswitch (so I'm not a boutique-purist-know-it-all-snob, big deal). The reason I bought it originally was the wide variety of tones, not least of which was the high gain second channel. Back then I was a teenage rocker. I've broadened my horizons since then, but I still like to rock now and then. Anyway, channel two was blistering, and I had dreams of being the next Billy Corgan, washing the masses in sweet feedback, and then slicing their heads open with Pantera/Metallica-ish riffs. Like I said, I was young. So when I bought the amp, I didn't realize it didn't get very good clean sounds. More on that later. The footswitch is good. What else... oh yeah, the 5 band EQ is great, and the ability to pair it with either channel or both is also great. The push/pull gain knob on channel one increases the versatility. You can get some pretty raunchy sounds from channel one, and not just teenage-fantasy gain either. That's what the second channel is for. Whatever you want to play blues, rootsy, straight-up rock n' roll AC/DC style, alt.country fuzz can be played just on that one channel. Between the EQ, the treble, mid, and bass knobs, and the push/pull gain control, you can dial in about anything you need. Also the master volume. Each channel has it's own volume control, and then there's one master volume. That's pretty cool too.

The clean sounds, or lack thereof. If you can clean channel one up, it sounds weak and brittle. The reverb is weak as well. Good thing I don't use reverb that much. That's about it.

I guess it's pretty good. I haven't had any trouble in 10 years, but I don't gig or anything. My brother used it for a few I think, and a friend of mine used it for one. It's fairly solid.

Here's the thing I usually play strats (a USA Start Plus from 1991 and Mexi-strat with wild, noisy pickups, also 91). The amp sounded great for me, and then one day I got a hold of a Les Paul (Studio Lite, mini humbuckers, solid mahogany carved top body, no maple, and the worst bridge ever made, a Steinberger floating dealy) that really brought the amp to life. The amp was rockin' before, but now it's even more so. Way more so. I can only imagine the destructive powers of a really good LP, SG, or a PRS or something.

Mesa Boogie DC-5 Combo
4
I traded my TC Electronics g-major effects unit for this combo. That guy was a moron.

I like the built in graphic eq! So convenient! Mine was damaged and someone wired the pull knob in the boost position before I got it, so I haven't heard the unboosted clean channel. But I am planning on getting it repaired. But the 2 channels I have to work with now are great! I can get almost fender-y cleans if the gain is low on the clean channel, and I can really tear shit up on the lead, without the use of any external processors, pedals and the like. Again, mainly due to the eq.

I don't like Mesa/Boogie because of their ridiculous prices. I lookedinto getting a foot controller for this thing, they want $45 american dollars for a 1-button! Screw that, I am now using my a/b box (was free whenever I got it...) with an insert cable. Works fine.

It seems tough enough. It's in bad cosmetic condition, but this one is an old one. As soon as I take it in for a tune up I'm sure it will rock once again.

Mesa has got one hell of a libido. They should tone down on their prices.

It is very easy to use once THE sound has been dialed in. Mesa offers a template guide for the different styles. Taking that as a starting point, it's easy to make corrections so it sounds the way you want it to. The two channels are well-thought out and offer two different footswitchable distortions. Afterwards it's better to adjust the volume on your guitar to achieve the desired tone. I, personally, use an SG standard, which allows me to switch between 3 volume presets. Combined with the two amp channels, I get a broad enough palette to not have to touch the amp settings during a concert.

Having to carry 66.1 lbs around is quickly compensated as soon as the tubes warm up.

A striking memory I have of the first time I plugged in my guitar was thinking "So this is how my guitar sounds!" That's the impression you get from this amp, the clean sound takes the best of what the guitar has to offer.

I'm a big fan of DreamThreater and we sometimes try to rehearse some of their songs. The DC-5 undoubtedly excels in such exercises. However, we are a very eclectic band and we also love to play blues, metal, pop rock, reggae. The warmth of its sounds is perfect, whatever the result you're looking for. The clarity and roundness of the sound offers a range of possibilities that goes from a warm, embracing sound to a harrowing one, without compromising on quality.

The power has never been insufficient and even when pushed to extremes it still delivers on quality, I would even say that the sound benefits at higher volumes.

I bought this amp secondhand a couple of months ago and I have never regretted anything, except not having bought it earlier. Actually (many will bash at me for this), I previously had an 80W Marshall and now have the impression of having moved on from a toy to a real instrument. After having tested different brands with names such as junior blues, deville, deluxe, etc., I recommend everyone to consider a secondhand Mesa Boogie before forking out 1000 bucks in a new amp, even if you aren't considering the mesa sound in particular. Once the beast is tamed, it will offer you a rare pleasure when playing.
Did you find this review helpful?yesno
»
Read the 11 user reviews on the Mesa Boogie DC-5 Combo »