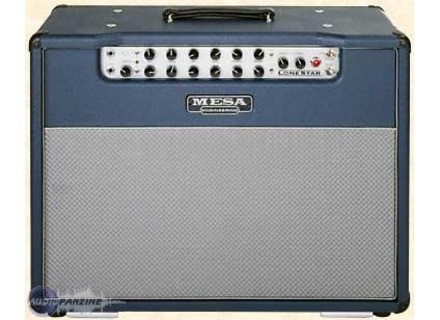 Mesa Boogie Lone Star Classic 1x12 Combo
4
The Mesa Boogie Lonestar Classic is a fairly recent offering from the company designed to offer an amplifier that was meant to do cleaner and lower gain sort of tones for the more vintage minded player. The Lone Star has been utilized by great players such as Andy Timmons for use in their pro rigs, and the 1x12 combo version is great for players that want the Lone Star tone in a smaller combo amplifier.

The amp is a dual channel amp that is basically designed to be Mesa's answer to a Fender Twin Reverb or other such "Blackface type" amps. It adds to this wonderful clean channel with an excellent drive channel that is great for smoother lead tones for fusion or some more mild shred. It's not an absurdly high gain amp, but it can be boosted with a good overdrive pedal if needed. Here's a more complete list of specifications:

Dialing in this amp is far more difficult than I'd like it to have been, especially on channel two. The channels are laid out fairly simply with their separate gain, volume and equalization controls as well as a few basic switching options for different modes on each channel, but the thing about this amp that kind of bugged me about setting it up is that there is definitely a learning curve to figuring out how the EQ controls react - especially on the drive channel. The clean channel is the easier of the two to dial in because it's basically geared up to do pristine clean or a more broken up "pushed" type of clean sound. For that channel I just set my gain levels and then decided on where the EQ controls should go afterwords. For the drive channel I had a few more hurdles in setting it up to sound good. When it's dialed in badly, the amp has a certain buzziness and overbearing bass that is hard to get rid of. It took me probably about an hour to really get the controls set just so with the Les Paul I was using. I find that with this amp, the lows need to be turned down and the highs need to come up more than usual to compensate for the more prominent low end that this amplifier has.

I've tried this amplifier mostly with a Les Paul and I can basically say that I love the clean tones. It sounds like a great vintage Fender that's been brought into the modern age. It responds with great dynamics and a clear note to note distinction that makes playing a breeze. It's a great channel for jazz or blues as well, because when you push the gain a bit, it gives the amp a nice throaty voice that really allows the user to dig in and get some great harmonics and other overtones happening when the tubes start to cook.

The drive channel once it's dialed in sounds awesome. It has a great smooth voicing that is perfect for fusion players who want a sound that's heavy in the mids and has a refined gain structure with no odd order peaks. It's almost too pristine sounding at times (IE: it'd be nice if it had a bit more oomph to it) but for those looking for a very smooth and clear overdrive sound that is a good low to mid gain tone, this will get you there.

All in all I think the Mesa Lone Star Classic combo is a great example of a Fender-y clean amp that sounds just wonderful. The drive channel takes some dialing in for sure, but you can get it to be great with some tweaking. At about $2,100 new, these amps aren't cheap but if you're looking for a no compromises great boutique clean tone, the Mesa Lone Star Classic is worth a serious look.

Mesa Boogie Lone Star Classic 1x12 Combo
5
The Mesa/Boogie Lonestar is an amplifier tailored more towards the classic and vintage side. Mesa describes it as being a "Texas" amp, and I can hear that, but I think it's a bit more versatile than what they're hinting at. It's a 6L6 or EL34 based two channel amplifier that features various mini toggle switches for voicing changes, wattage selection, an effects loop, a solo boost and a bunch more other features.

Mesa/Boogie did a great job at packing everything in this amp without being overly complicated. It has lots of voicing switches, but there aren't so many that it makes you want to spin your head like certain other amps. The best part is that all the voicing switches are very useful and can really deliver some amazingly versatile tones out of this thing. The Mesa/Boogie manuals are some of the best on the market, and they'll give you example settings, show you where the sweet spots are, how certain knobs work and how to take care of your amplifier. The best thing is that Mesa amps are highly reliable, so there should be no issues taking this on the road.

Mesa describes this as a "Texas" amp, giving homage to Stevie Ray Vaughan. It does do that tone, and it does it great. However, it's a lot more versatile than that. Aside from trying to capture that almost Dumble-esque lure, it can deliver some of the best clean tones on the market that'll rival any Fender. The gain tone just blooms and has this great wooly quality, and it sounds absolutely massive once cranked in 100 watt mode. You can also slap in some EL34 tubes to give you a totally different flavor of sound.

Those looking for a more modern vintage sounding amplifier should really look no further than this. Compared to the Lonestar Special, this one sounds a bit bigger and has a slightly different character, but they're both great. I have a hard time choosing between the two. I find the Lonestar Classic to be a little more versatile, especially when it comes to gain tones, but both should be able to deliver whatever you want. Andy Timmons did a great job on this, and while his gain tone is a bit too dark, it can help you better understand what this amp is all about. You can find it on Mesa's website.

- Quite complex configuration providing many possibilities

- It's easy to get a good sound but you'll have to be patient if you want to find your own tone, like with every amp in this category... After half an hour you'll understand how the different knobs interact with each other so you can find you personal tone.

- It suits my needs although I play almost every music style (jazz, pop, rock, hard but no metal)

- Every kind of sound is possible. The clean tone is even better than with a Fender because the low-mids are excellent and let the signal cut through the mix without being aggressive. High-class sound!

- The second channel provides a singing, precise and musical overdrive that responds perfectly to your playing. But not for heavy metal!

- I like everything about this amp except for its weight and size... but they are still acceptable.

roulian70's review (This content has been automatically translated from French)

Mesa Boogie Lone Star Classic 1x12 Combo
5
The Mesa / Boogie Lone Star Classic is a Class A amp, all tube with 4 6L6 power tubes that can be replaced later by EL34 (why do not forget to change the position mini switch 6l6l / EL34 situ asur monstre.On the rear side there are also five lamps 12AX7 preamp type and lamp type grinder 5U4.une particularity makes the strength of this amp is the spring reverb. There are two types of reverb that are really merveilleuses.L amp has 2 channels ... channel 1: crystal clear sound and prcis (which only sounds were the mesa recipes)
Channel 2: Channel 1 clone with a little crunch in + or saturation rather serious but not suitable at all to keep on metal ... rockin'in the free world

The configuration of the lone star is really the most simple.on branch is switched on turns the by-pass a few buttons and you turn the sound is already la.le clean channel is controlled by a simple vraimen against saturation is somewhat tougher a reglprparez you break your back for a good half hour to turn the knobs until you either type of sound) this saturation is really pretty and really it prcise.Du cot Manual is very clear (as far as channel 1 ...) everything is explained even if it is not rocket science to use this ampli.vous'll need can be in terms of the use of connectors the rear face of the amp, but otherwise no need to break the head ... and as I often say keep on rockin'in a free world

Personally I play a LOT of different style and I find that the lone star is a fairly versatile amp should have most of the styles that I play but it is still more ax rock and blues johnsonien hendrixien ... (I do not know French trs if all this ...) that's dir ... fan of cradle of filth or other metalheads go your way to rectify a triple ... it says impossible is not in mesa y adding a good metal muff electro harmonix ca can change the soft teddy bear will turn into a bloodthirsty beast ... I play primarily on gibson les paul studio and equip ibanez EMG is as much as you dir is a pleasure to play on small balls ... but I do not put the maximum mark this heading because of the saturation too soft for my taste ... but as they say all tastes are in nature

I just bought this amp 3 days ago, I can tell you that I did not let breathe I test cast fills in the channel ... I love clean.sent lie I ' I never heard a sound like ca.tant of claret every note I refrain from shedding a tear ... c vraimen jolie.J 'love everything of this amp even if I have a large preference for the sound clear saturation is far from unpleasant ... but I think acquiring a metal muff for sound has RONDAT satriani.avant or will I play this amp on amp such as Fender, Hughes & Kettner, Marshall and even a line6 amp and I personally horeur of modeling, but the best is this one ...
even if the price is quite push (yes I admit that my banquire will make me the head for a while because of the credit ... but hey it's only one life) and after s in all this worth it ... nothing will make me change my mind over what has this amp gnial and even if the distortion is not enough for my taste I pushed him puts all the points, because a faith more mesa shows us his knowledge and my god it's good ... go have fun and mesa / boogie forever
KEEP THE FREE WORLD ON ROCKIN'IN