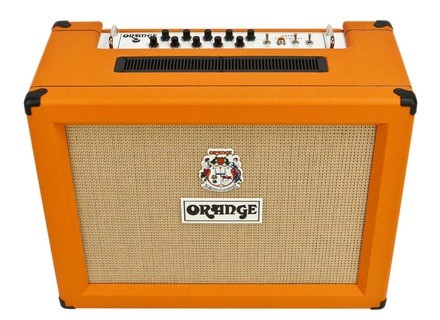 Orange AD30TC
4
The Orange AD30 is a combo built by the British company to capture a different share of their market. The AD30 is a 30 watt dual channel combo with two identical looking channels. Each channel is equipped with gain, volume, bass, middle and treble controls. Though the channels are identical, the bottom channel is voiced much hotter and is intended to be the amp's drive channel, whereas the top channel is voiced for a cleaner sound. The amp has no reverb or effects loop, keeping it in the fairly old school camp. It puts out 30 watts of power, runs on EL84 power tubes (a different characteristic to the standard EL34) and is a 2x12 combo with Celestion Vintage 30 speakers.

Getting a good sound out of this amp is a little bit more difficult than I would've expected from such a simple looking design. The tones are really quite loose and can get muddy easily if you dial it in the wrong way. The controls react fairly effectively to tweaking, but the amp has an inherent loose and bassy quality that is tougher to dial out. As a result the amp sounds a bit undefined at times and not articulate enough for the more standard hard rock styles that I generally put all high gainers through.

When this amp IS finally dialed in the sounds are actually quite cool. I owned a Rockerverb 50 at the time that I was considering this amp as well and noted that this amp sounded looser, more vintage, had much less gain (using that control on full with the AD30 was equal to about 1/2 gain on my RV). It's not quite what I'd call a modern sounding amp, but it definitely does have a cool gain voicing that works well for more classic styles. The clean channel has a nice Class A chime. It's a bit grittier than a typical clean, but it does have a certain cool bite to it that really stands apart. The drive channel is a fairly loose and very raunchy drive tone; not a lot of gain but a certain menacing quality that just works very well for '70s type rock. It doesn't have enough gain or tightness for modern music, but that wasn't the intent for the design.

All in all I think the Orange AD30 is a decent amp for someone looking for a more vintage style Orange amp in a not too complex package. The two channels sound great when you dial them both in and the lack of superfluous features gives a nice purity of sound. At $2,000 new this amp isn't the cheapest in the stable, but if you're looking for a cool vintage amp that will give you a different take on that British roar, this one might be work a look.
Did you find this review helpful?yesno
»

Orange AD30TC
5
One of my favorite British voice amplifiers in the world has to be Orange amplifiers. They have such a great tone certainly more leanings vintage type tones. They are pretty aggressive in their sound and heavy gain and a stick behind the motto of Marshall killer. I wouldn't say that these amplifiers are Marshall killers but they certainly don't have to be modified as much as you would see Marshall amplifiers. They already come well-equipped with loads of gain if you need that which is generally the reason why you modify a Marshall amplifier. Marshalls don't really come stock with a ton of gine but you have to send it off to a guitar or amp tech to get some modifications done to give you that gain you here on most hard rock and metal albums.


This amplifiers basically 30 watt two channel combo amplifier. Each channel has two separate signal paths that allow you to dial in each respective channel individually and on your own. This is not like a amplifier that claims its multiple channels then uses the same EQing as the other channel. This is a great amplifier to get you a great British voice tone this can be plenty saturated and great for recording and gigging. In any application this amp will be a perfect fit.

These amps come in right around $2200 or so on the new market. It is not that bad of a price for a great sounding solid combo amplifier that is made in the united kingdom. It is a good sounding combo that will be perfect for gigging and recording. It has a voicing more towards a vintage tone so if that is your thing then this is a great amp for your needs.
Did you find this review helpful?yesno
»

etid's review (This content has been automatically translated from French)

Very easy to use, no need to book. Obtaining a "good" depends on the knowledge and desires of each. Personally, I had 3 repeats to get the sound I wanted. Since I do affects more!

I play in a group of pop / rock French and I use it very clear in his channel1 crunch and distortion with the gain push down CH2. It's a pretty sweet amp, and if you really want to type in the metal it will add a proper pedal: We can not say that the distortion is enormous.
Also I have not managed to get a clear sound really clean. This does not bother me for the style I play, but it's good to know. Finally you must know that accuracy is impressive it just touches, and the sound is changed, it changes the transistor!
As an example, I play it with a Lag Roxanne. And I really love the sound that I have right now.

I use it for three months, and it suits me perfectly. I plan to buy a distortion pedal in addition to the passages a little more nervous. What bothers me most is the footswitch not included! Frankly at that price, they could make an effort.
The price ... this is the rub ... It's expensive. Especially when compared to other all-tube amp that have many more settings and other important details. I tried everything before you buy: Marshall, Fender, Ashdown, Riviera, Mesa Boogie all in a price range between 800 and 1500 euros. I returned to that of ... Why? Because the sound is warm, there is no 10000 settings to make it sound worse and it is beautiful! A favorite kind ...
This choice I do it again no problem. BUT I do not advise to buy it: Whatever one may say, an amp at this price, it's a favorite. I saw 10 different stores and saw sales yell at each other in the store to defend this or that brand! There's no doubt it is the heart that speaks.
Did you find this review helpful?yesno
»

rafbeyonddriven's review (This content has been automatically translated from French)

What I sduit in this amp is the simplicity of use. there is the necessary, the surplus has vir t altogether. If you your like me and you love and you plug your guitar sound without taking the head two hours to get a sound, this amp is for you!

I keep my JCM900, that I like (I know there is not many), but this Orange amp is a marvel. This amp can play rock, let it be said! The distortion is not Orange trs saturates, but it has a fucking EHJV! Listen Albums Refused, Jimmy Eat World, Queens of the Stone Age .. There is in the Orange!
Personal I used a tlcaster, a Les Paul Standard and an old Samick all redone with dual EMG active. I got sounds really different, so these are the guitars that make a diffrence with this amp. But here must ca serious! Above all, the power DGIG by this small machine is incredible! I'm in a hurry to try studio. Some will find it lacks distortion, but in a group, the sound of this amp resort, The definition is the means the note, and it feels good

A marvel, its a standard (attention, when I say "huge", it has nothing do with a 5150 Dual Rectifier or other, must love the sound "vintage") that changes with the guitar Whereas branch e above, a particular look (which I love) an ultra-simple, and weight and price trs (too) levs!

Did you find this review helpful?yesno
»
Read the 5 user reviews on the Orange AD30TC »