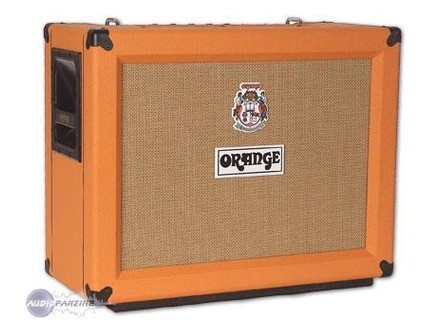 Orange AD30R
5
The Orange Amps AD 30 guitar amp head is a tube based amp that has two different channels. It is great having the two channels because it allows you to go back and forth between two distinct sounds of your choosing. It has a 1/4 inch input in the front and speaker cable output to send it to a cabinet in the back. Each channel has parameters for master, treble, middle, bass, and gain. There are also switches for power, standby, and to choose between the two channels. The amp head isn't too heavy and has handles for easy carrying.

The make up of the Orange Amps AD 30 is very easy to follow, as the knobs are for basic parameters that are seen on a lot of different amps. It is easy to get a great sound from this, and there is definitely a good deal of versatility in the different tones you can get from this amp. I don't have a manual for this, but it is easy enough to use that you shouldn't need it if you don't have one already.

I have used the Orange Amps AD 30 primarily for recording rock music, but will work great in just about any setting. It can get extremely loud, and both the clean and distorted tones are top notch. However, I mostly use this for overdriven sounds rather than clean, as distortion is really its specialty. I'm a huge fan of the sound of this amp, and most of the other Orange amps out there as well.

froggy54's review (This content has been automatically translated from French)" 100% pure orange juice!"

I put 9 because there is no effects loop but frankly, it would not have served much.

Mono channel so simple.
The gain just where you need according to his taste and his guitar is adjusted, if necessary, are equalized and it's ready !!

There is no better for his English clear distortion.

Excellent with any good guitar, it controls all the fingers and knobs.
The amp is clear with a stat with a gain at noon and going until crunch / distortion Led Zeppelin with a Les Paul.
The sound is clear as a vintage crunch, typical of the Orange amps big time. The distortion does not look like modern heads at Orange (Tiny Terror, Dual Terror, Dark Terror).
The clean sound is superb, full of wealth and keeping a crystalline medium attack, the crunch is creamy and heavy like a chocolate eclair!

So perfect for rock, blues, funk and pop but why not jazz thanks to the clear sound quality.
on the other hand, for metal, foot binding and is ruthless with guitars microphones soulless.
The spring reverb is very good but does not go to the reverb of surf music.

No effects loop but cash all pedals with talent.

Very important headroom with very gradual adjustment of gain, which is not always the case with Orange.

Used for 1 year with pleasure after having the AD30HTC the Rocker30 and tested a OR15h and Dark Terror.

For me, this is the best Orange with AD30HTC head (channel 1 of AD30HTC is identical to AD30R). Although single channel, it is very versatile because it goes from Rock to Blues to Jazz to Funk to Pop simply by touching the microphone volume and attacking the strings more or less.

Since I have my pedals seem useless!

Note: Among the Orange amps, this is the one that makes the most of having clear sound at high volume even with a Les Paul.