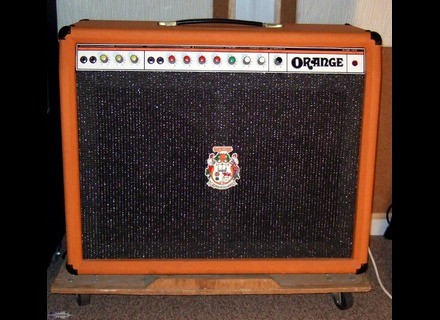 Orange Hustler 125 Reverb Twin
5
This amp was launched in 1975 by Orange (mine is 77), under the name "custom twin reverb" (a combo version and a version of Head). There is a 50w version (the one I combo) and a 100w version.
For these versions, there are two channels, but good as usual was quick to turn to the only one who can adjust a little more finely the sound ... hammond reverb and tremolo (that one can order a double footswitch ... without LED, ie with just a inter open or closed for each footswitch).

It can also connect additional HP (in 8ohms). Well there will start to make strong (I tried with 50W ... I dare not imagine the 100W).

One last point it was launched to compete fender twin reverb.
A little history of someone orange:

- Mick Dines - Orange Factory Manager
"The Twin Reverb WAS Introduced to Compete with the Fender Twin Reverb. We were targeting That market, so we priced our release to be competitive with the Fender. The Orange Twin Reverb Custom aussi featured a Hammond spring reverb, tremolo and has a master volume. It was designed as a very versatile studio 50 watt amplifier - and, Indeed, it Proved to be. Later, 100 watt version of WAS made, both, cam models with a footswitch. "
https://www.orangeamps.com/heritage/legacy-products/1960s-1970s/1975-custom-reverb-twin-combo-custom-reverb-head/

Very easy to use, the sound just comes. I recommend putting the MAIN three-quarter then put some PREAMP, clear sound quickly becomes huge, ultra now sns necessarily have an unmanageable volume (eg on stage where we quickly asked for even the% # @ !% guitarist down his amp because it smashes the mix

Perfect for my style of music, rock, indie, tablecloths, electro ... I use a Telecaster with us ... it works great (a bit like when a VOX and a Telecaster one branch, it looks like they are made to live together).

I also play with a Jazzmaster, and then it becomes very, very far, I have to change some settings, and it starts again nikel.

I have 2 years, gross and this allows me to play a live or via pedals without any problem, whether in concert, recording (a little buzz anyway when it is very strong but best avoided ...

, or even on a theater stage.

guilhem001's review (This content has been automatically translated from French)" Amp exception!"

Very easy to use as any vintage tube amp

Extremely powerful amp
You can keep a clear sound at high volumes
The sound of channel 1 is very good, clear grain reminds me of the clear channel Rocker 30 I owned elsewhere. On this channel you can get the crunch, but not saturated.
Channel 2 is dedicated to vintage crunch tones and saturated typed hard rock of the 70s.
There is not enough gain for metal for example, but it is not the purpose of this amp.
Corrections are effective.
Reverb very quiet compared to Fender.

Amp rare in France, even in the world (very little literature on the internet)
I recovered very degraded to rehabilitate (the former owner had not really cared).
However, I use the pro for a revision and retubing.
I do not regret this investment: after restoration, the sound is excellent, the phenomenal power ... Amp exception!