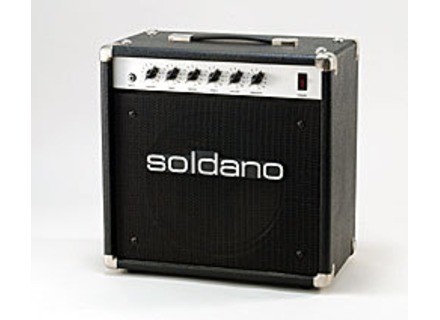 The Atomic 16 is somewhat of a rare bird. I have only seen 10 or so for sale since I purchased mine. Granted, I haven't been trolling ebay for them, but I have come across very few. They aren't like JCM 800's or DSL's which seem to grow on trees.

It is a very very very simple amp. If you can't get good tones from it, the problem lies with you. I sort of liken it to a JCM 800 as far as controls go. I will say the the lack of an FX loop is a letdown for sure, but oh well. I actually contacted Soldano about adding one, but it would have been a bigger undertaking than I could have afforded at the time. That was when I used the Atomic 16 as my main amp. Now a days, I use it for recording if I need a specific flavor.

Like I mentioned above, the Atomic 16 sounds like a cross between a Marshall JCM800 and a Vox AC30. The distortion it produces is quite smooth. This probably has a lot to do with the EL84's in the power section. This isn't a 'high gain' amp at all, but you can get somewhat more than JCM800 levels of gain. It also takes pedals very well. If you dial it in clean, it really reminds me of an AC30; kinda chimey with a hint of breakup. I like to crank the gain on it to 11 since it sounds very smooth. In the past I used a Tube Screamer with it for even more gain.

My only real complaint about this amp is its lack of bass. It's not a huge deal, but coming from my Mesa's, you really notice they lack of low end. Now, it's perfect for recording, but for live I miss having that low end presence. Aside from that, the lack of an FX loop is a bummer since I use delay a lot. So, that's a deal breaker for me to use it live anymore. I've also gone to a higher gain flavor of amps, but this remains in the stable as a studio option.

Above all, this is the most reliable amp I have ever owned. I have changed the tubes once in twelve years, which is insane. It has never not worked, never had a hint of an issue, nothing. Just a total tank of an amp. Extremely well built.

This was actually my very first tube amp. I went into a guitar store to buy a Marshall, and I came out with this amp and 4x12 Soldano cab for 1k.

It doesn't have as many options as my other amps, but it isn't really meant to be that kind of amp. It's more of a simple amp with just great tones. It was a great first tube amp for sure. I have no plans on selling it.

Soldano Atomic 16
4
The Soldano Atomic 16 is a smaller amp from the company known for building firebreather legends such as the Super Lead Overdrive 100 or Hot Rod Series of amps. It's definitely a very cool little amp though. It's single channel and has preamp gain, bass, middle, treble, presence, and volume controls. They are also available with onboard reverb. It's tube, and puts out about 20 watts as powered by EL84 tubes. There's no effects loop, though it might be an option if you order custom. Though it lacks the channel switching or functionality of some bigger amps, it keeps up with them in the tone department for sure!_

Getting a good sound out of this amp is pretty simple for sure. It's only single channel and the controls are all pretty interactive, which I like. The classic rippin' preamp gain is there, but you can also dial in some cool clean or edge of breakup crunch tones if you so desire that. It doesn't have a ton of low end to it (more focused in the high end to my ears) but it's also a low wattage 1x12 combo, so it won't have the heft of a 100w head pushing a 4x12 cab. It sounds cool with different guitars as well but seems to excel best with something with fairly hot humbuckers.

This amp could be called a bit of a one trick pony tone wise. It really was designed to get that really high gain Soldano sound in a smaller package. However, it's the type of amp that still needs a bit of volume to really sound good, and 20 watts is still a pretty loud rig. At lower volumes I found it to be a bit scratchy and thin sounding, but as I turned it up it sounded pretty awesome. The clean tones when set up are quite nice. It's not as woody as a Fender nor as chimey as a VOX, but it has its own brigher vibe going on that's almost more hi-fi. The crunch tones are good for some Briish fury (kinda like a Marshall JMP or early 800) and with the gain really turned up high it's that classic rip roaring Soldano tone. It's very articulate and perfect for eighties riffage or leads to my ears. I can only imagine how could it would sound if it was pushing a 4x12 cab!

All in all I think the Soldano Atomic 16 is a great little amp for someone who wants that awesome Soldano hi gain tone at a lower volume and in a smaller package. It lacks many of the features of higher wattage/priced amps but it sounds quite good considering these supposed drawbacks. It sells new for about $1,200 for the reverb loaded model (a must for me since there's no effects loop) which is a pretty good deal. Compare that to the flagship SLO at almost $4,000, and it's a comparative bargain!
Did you find this review helpful?yesno
»

Soldano Atomic 16
4
Soldano is one of those companies that has a reputation of style, elegance, and raw emotion. Their amps are built to rock an ti even says that on the foot switchers that come with the amps. Their amps are built to rock and that they do quite well. Soldano build hot rodded amps for those wanting a british flavor tone with a hot rodded preamp and power amp sections. These amps all started with the SLO and them branched off to create many more tone machines. It all started back in the 89's when Mike started getting his amps in the hands of just about every hair metal guitarist on the Sunset Strip. Late he moved to Washington State and that is wen the company really started to take flight. Soldano amps are king!

This is a single channel hot rod monster amp. You get 15 watts of power and simple front panel layout. You have preamp gain, bass, middle, treble, volume, and presence. There isn't much to figure out with these set of simple control knobs. This amp is easy to dial in a usable tone. The amp itself is already a great sounding amp not matter where you have the dials but it just makes it easier to dial it in to your favorite guitar.

With a Soldano amp you get an immense amount of usable tone and gain. They are known for having over the top gain that is usable in every band mix. Sometimes too much gain get lost behind the band but the way the Soldano's are voiced makes them so much better at riving the music rather than laying back.

I love the way this amp sound with a Charvel or a superstrat of some kind. The two just go hand in hand. You need a brighter voicing guitar with the Soldano because they have so much lower mid gain that you need to balance them out a little more with a an alder or maple wood guitar. Certainly a mahogany will do wonders but I prefer the tone of the lighter wood with the SOldano amps.

I believe these amps were discontinued back a few years ago. You can still find them in the classifieds and on forums if you look hard enough. These aren't as popular as the SLO or the Hot Rod series from Soldano. But they are definitely out there and can be snatched pi relatively cheap.

If you are looking for a great sounding rock machine that is only one channel then this might be your bag. If you need multiple channels then a Blackstar might be up your ally.
Did you find this review helpful?yesno
»

scaramouche01's review (This content has been automatically translated from French)

Well in fact I would say it's a deceptively simple amp, I mean by that there is no plthore of rglages, but little is Submitted devilishly effective.
Just to get a good sound should not be afraid to get involved (if you know what I mean; D)
I did not get a manual with this amp

We do little better!! In fact I recommend it more for the blues - blues-rock - rock - angry
I play with a Stratocaster, and a schecter c1 30 th anniversary, and both guitars give me a broad spectrum of sound.
I prconise not to over-ride the pramp (could become a bit messy)
I'm using a Boss LS2 pedals which, although used, no use for 2 suplmentaires boost, bringing the number of three sounds that I can get (for a single channel is I think a lot!)
To join the opinion of hammam27, do not expect clear and limpid fenderien, in contrast to the crunch ........... that is fabulous (and trs low volume)!
To finish with the sound, it's good to prciser the volume of the guitar has a more notorious than the gain and grain, there's plenty to do anything with the SETTING THE guitar.

I use this amp for about 3 months
The more sound
Hp = the least a bit pte-sec - the false simplicity of the beast
No I did not try normment amp, but I think that is one his favorite; D
On OCCAZ it can be found between 500 and 700 euros, and for that price, I do not get any better (in the crunch sounds !!!!)
I would do this twice a choice plutt!

Did you find this review helpful?yesno
»
Read the 5 user reviews on the Soldano Atomic 16 »