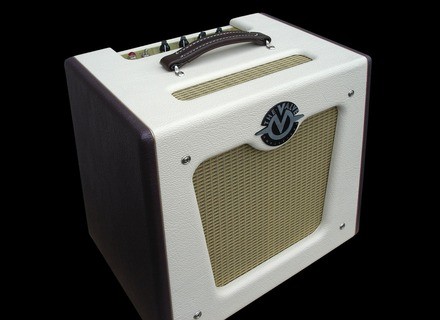 Baraka!'s review (This content has been automatically translated from French)" Sublime!"

The Valve 105 Bimbo
5
All lamp!
5 Watts
1 tone control
1 GAIN
VOLUME 1
=> The desired sound by varying the combination of the two
1 ATTENUATOR! this is great because it lowers the volume WITHOUT losing sound quality

Ultra simple, just to cross the gain and volume for sound ranging from light => crunch => distortion
the sound quality is at the center of this amp, it's a bomb, absolutely brilliant.
Despite his 5 Watts, it sends nearly as loud as my 15 watt fender to transistor ... It's amazing

At ease in his clear, it is mainly the same crunch and distortion that can be burst. This is a clone of Marshall plexi, but with the volume control to play at home or in a club, or to his models.
However, if you want only the clear sound (fender princetone beautiful ... also its kind) will need to look elsewhere, because this is not where Bimbo excels most obviously.
In addition, it collects the pedals beautifully. Everything is enhanced with this tool there!

After a little over a year, I would do this choice without hesitation. This is an exceptional quality amp and simplicity. Perfect for home, rehearsing and small clubs.
I put the overall good because to be perfect, it would also require clean sounds are impeccable (there very good but not perfect) And yes, we always want more

The Valve 105 Bimbo
2
The technical specifications have already been given in the menu on this amp. I therefore immediately to the "subjective impression" of my test. The Valve totally breathes the fine work. We knew that the Italians were making beautiful clothes, the attention to detail, the recovery of this amp Deco touches the Emporio Armani. It will be wonderful in your living room. The controls are simple design. This is not a criticism but rather a philosophy. The presence of built-in attenuator is really a plus for this product
<div></div>
(7) it could be more complete. No DI output with speaker simulation, no équalo active, let alone effects loop ... it is a simplistic amplifier in pure. Normally 5, but the attenuator and finish to take note 7.

Naturally, the advantage of such an architecture (a tone) is to be relatively intuitive to adjust. Bimbo&#39;s is no exception since button quickly just. I was accompanied by a colleague who began, he asked me how I was to find as quickly kills the sound with that gear. The answer: we appreciate all intuitive small craft like that after trying mesas and Diezel other four channels. <img class="smiley" src="https://fr.audiofanzine.com/images/audiofanzine/interface/smileys/icon_biggrin.gif" alt="biggrin" /> The guy who needs a manual for this machine should still consider buying this amp anyway. The group use is excluded except if your friends are a capella, and play with acoustic and tam tams. The big advantage is undoubtedly its integrated attenuator, to play, even in HLM, in perfect conditions and with her on top. I note that it does not color the sound, even on extreme settings. So you can whisper to you and have a suitable volume. Hat. (5) diplomatic note. Some regret the lack of opportunities for more extensive sound sculpturing.

That&#39;s the part where we will be able to linger. Indeed, it is not every day that passes a 5w to almost 2000 balls. So what does it do to know what price? The answer: it sounds like a great sound of british bimbo is very oriented rock and blues. Although it has its paw, it revolves around the 1959&#39;s Jim Marshall plexi. Clean sound is a little more earthy whole (not farting this aspect and more focused lower midrange), but is very successful. Note that the receiver wants to quickly leave for crunch and it will test your guitar if it is equipped with a double. The crunch, well defined and developed progressive development pleasant, is allowed to rise to average degrees. Can gainer than the TDCA, but less than Van Halen (for example). Note that it is of the highest interest of the play between knob gain, tone and volume, the power section that also want cruncher from medium volumes. We can add distortion preamp and power stage for something very catchy. The amp has a little tendency to color the sound. Whatever the model or the architecture of the guitar, there is the personal touch that comes from the amp to put its own layer. The dynamics and harmonic richness are at the top, a Blackheart Blackstar or another can not, here, not suffer the comparison (although they are quite respectable products), just note that Budda SuperDrive, a JMP1959 JTM45 or have yet more increased sensitivity to touch. It is not even in the uncontested reference to this last point, but it is in the top 50. This amp should therefore also to a little less experienced guitarists (not the side of a neutral 65 amp Lil Elvis eg). (9) because it lacks a little noise this versatility found in some competitors. In 5W we are however close to perfection.

Overall, the only amp that I consider best for small amps again is Lil Elvis. More flexible use, more versatile (power 12W), equally at home at low volume and putting even one more notch sound to perfection. But even compared to the whole world of amplification, Bimbo is not pale. This led to an amp for someone who wants his leg with a small vintage rock to the salon, which neighbors grumpy. (3) Huh? Why "3"? Because I consider that Italy has lower wages than the U.S. or England. Italy is next door to us, which should affect the port and that, consequently, the price of more than 2000 CHF (about 1350 euros), mainly due to a desire to position marketing. For the same price, I can be imported from the USA rockytop components of any first choices, and there are lots of competing 5 to 18w more affordable than this combo. So, if overall I&#39;d say it&#39;s up to you, in the end this combo is very expensive for not repeating that apartment.

Edit 2011: After a short visit today. I note that the prices in Switzerland fell to 900 euros.