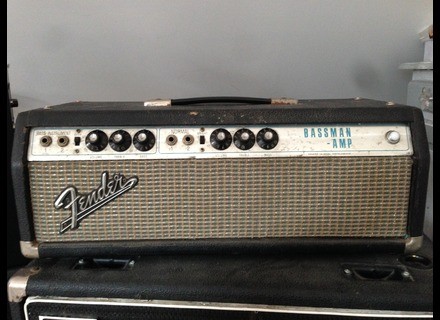 View other reviews for this product:
Well that dear home fender bassman short version (it is smaller than a bassman 100) possesses tube preamplifier and amplifier (6 total) to 50 watts of power, it seems little, but it's just "seem "it's been pasque quite frankly we should have 3 to 100 db volume. (I laugh it is not something like that). is standard. Unfortunately, the connection is very simple (silent faithful to it in 69, when my bassman (serial is supported)), ie, 2 in (I do not know pourqwa, it must be signal stronger or weaker) in the channel bass, 3 knobs (vol, bass and TREB) and a switch normal / deep. Channel instrument (it is in this that I connect my guitar) has exactly the same but the rglages switch is called bright / normal. no loop, no footswitch, just one output and an output ext (a use that property seized by the ARO, at worst, it breaks in two volumes).

The config could not be more simple, frankly if there is one that includes not ...
the sound is direct, you branch your sound terrible, hot, bright, absolutely vintage that you die ca. Beyond that you can customize your sound with a little eq and the switch, it changes a lot but the tone remains bassman is undeniable. the manual does not exist.

This is typically one of the most beautiful clean sound that I had. In addition, he strong enough to slap a 50 Watts. Strong and warm. So, ca ca door and not break the ears (not as a frontman has pushed 15 of 110 flight if you follow me). from a volume of 3.2 s'entamme a slight overdrive and enough blues to the 5, the lower its full overdrive, sixties rock way ... I'm on a Fender Toronado double hambuckers, ca may not sound like a different scratch, but on a stratocaster is even better, the stratum has more rponse bassman and makes them good. Only downside, the switch in position breath bright enough ... it was good something for nothing.
2010 EDIT: I switched to a different set up but I keep plugging the output of my wet Whammy. Impossible to leave this little beast in my set up.

I use it for several months and it is not my first amp Obviously, I'm kb that are no adjustments to make, it sounds live is amazing. never seen it (not even a hot rod that can be loud sometimes) ... I paid 400 euros and I regret it, I never sell it.

EDIT 2010: A few years later, I like it much.
See the source
Did you find this review helpful?yesno
Cookies help us improve performance, enhance user experience and deliver our services. By using our services, you agree to our use of cookies. Find out more.