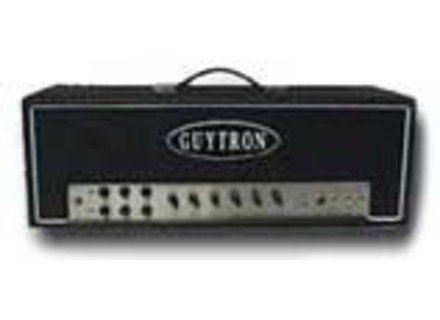 Guytron GT100 FV
3
2 channel 100 watt tube head that uses essentially a small amp loaded down into a big amp.
You have a pre-amp with its own power section with EL84s run into another power amp with four EL34s.
For channels you have a vintage voiced side and a modern voiced side. Both have level, gain, and tone controls. Then the master section has volume, treble, mid, bass, effects level and presence controls.
Two separate effects loops (instrument/line level). That can be used at the simultaneously.
Probably one of my favorite concepts ever.

It is very easy to get a great sound of it. Especially the more vintage-y channel that has less gain. The feel though is a different story.

The vintage side, especially when both the El84 and EL 34 section are cranked is glorious. Well that is when used with about any cab other than the Guytron 2x12. That specific cab did absolutely not work for my needs.
Now the B channel is a whole different story. It literally felt like I was dragging the guitar pick through a sponge. It was so bad that at first I started to change my technique. So much so that I actually ditched the pick. And then later had the amp modded so there was more filtering in the power section of the B channel. Tightening it up. Then it was much improved.

Well, after all the changes and modding it was actually a good sounding amp. But I spent way too much time to make that happen. Funnily enough as a rule I'm not fond of super tight amps. But this one was just way too loose for me.
Did you find this review helpful?yesno
»

Published on 01/20/09
GDS Amplification LLC announcedthat they have purchased the assets of the Guytron guitar amplifier company.