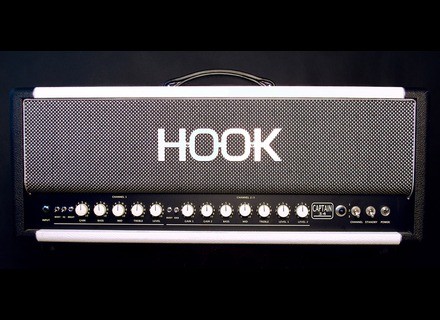 All user reviews for the Hook Amps Captain 34

Average Score:5.0(5/5 based on 1 review)
Audience: Advanced users Value For Money : Correct
Not satisfied with those reviews?
Our members also liked:

Le Taz's review"The only multichannel amp that plays in the same league as the "big" single channel ones!"

The amp only features rather classic features, but the way the EQ and gain settings interact are a little less intuitive than with other amps. However, it takes very little time to understand how it works and how each setting influences others and in the end you manage to find the sound you’re after. To get into Marshall territory, I tend to push presence to 75% (while I usually leave it at 0) while slightly lowering the lows.

I had tried to get that typical high-mid bite using the edge switch, but I fin dis just as shrilly as the bright switch from another Dutch brand, Koch, even with the highs and presence at zero – which says a lot. That edge switch is the sole real cons I found with this amp.

The effect loop it very efficient. With three master volume knobs, you end up with unpleasant pops when changing channel if the volume settings are not well-balanced. This will only be an issue to those who don’t take the time to take care of it, but it can be a problem in case of quick change in a live situation.

The clean channel is very wide and sounds very plexi-esque. A real “in-the-face” sound, even clinical-sounding if you don’t push the gain to the edge of crunch. The EQ cut allows you to bypass the equalizer, hence boosting the signal toward crunch territory and with the boost switch on you get into very vintage Marshallesque sounds – and rather heavy indeed. The channel is rather bluesy-sounding, but I must admit not having a crush on it though it’s very well-made.

The Lead I channel began to make me smile. It sounds great. Yeah, it seems stupid to say but that’s the case, a real tube amp drive, very 3D-ish, full of dynamics and presence, always heavy and well-made. It doesn’t go very far, a good OD sound reminiscent of a JCM800 without the latter’s aggressive high-mids. With the boost on, you gat a good classic rock rhythm sound, or early Clapton blues leads. Authentic and well-defined, with a real vintage touch and modern features.

The Lead II channel is very similar to the Lead I, while adding a little extra lows and – of course – drive, while keeping that vintage touch. Even with the boost switch on, don’t expect to get into metal territory – any genre of metal. But you’re in for blues, fusion, rock, classic-rock, with all the assets of a modern amp but the vintage charm without the hassle that usually come with it (especially the usual lack of precision when you drive the amp up). The grain and precision still deserve the gain not being pushed too far to get the best out of this amp. You may find it more comfortable with the gain cranked, but the sweet spot is located around 13h to 14h – to my taste at least.

As a whole, the overall sound is powerful, wide, three-dimensional, dynamic and always stylish.

An extremely good amp, designed by a professional who wanted channels rather close to each other for more live efficiency instead of a so-called U.S. Swiss army knife of an amp which would make the sound engineer mix separately the clean and overdriven channels. This amp sounds coherent and provides the comfort of modernity and a real vintage character in both sound and grain, though it won’t of course suit extreme or shred-oriented genres unless you add a few pedals. Yet, while this amp may sound very sweet, it can also turn your neighbours into your worst enemies if you live in a flat as it sounds really, really loud. This is the one big fault I find with this amp: why as much as 100 W?

In my opinion, Leendert Haaksma has achieved the impossible with this amp which was able to gather the sound characters of several vintage single-channel amps into a single amp while keeping all the qualities of such amps: sound grain, presence, projection, dynamic… This one is light years away from a synthetic-sounding Bogner XTC. Versatility was sacrificed in favour of sound quality, finally offering an amp with both an authentic sound and modern comfort of use, making this amp one-of-a-kind. You just need to require that sort of sonic identity, but any blues, rock or hard-rock player will consider it a must-have. It may only be reproached its lack of a more affirmed character, but as a Cornford player I believe it’s also a real asset to avoid tiring the ears. I wish it sounded a little more of Marshall-like aggressiveness, but experience tells me that a good guitar and amp tech may manage to do it.

An excellent piece of gear which won’t suit just anybody, but may resemble the ultimate amp for the audiophiles among us.
Did you find this review helpful?yesno
Cookies help us improve performance, enhance user experience and deliver our services. By using our services, you agree to our use of cookies. Find out more.