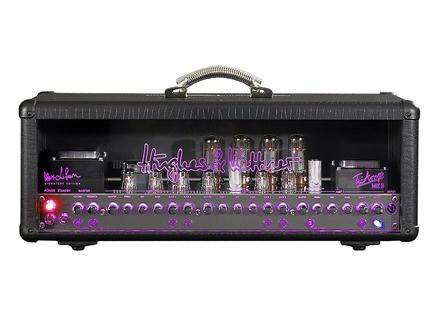 Hughes & Kettner TriAmp MKII Alex Lifeson
5
This amp is going to get a 10 out of 10 across the board. I am a big fan of the band Rush and even a bigger fan of Alex Lifeson. This is Alex's signature guitar amp. He was such a big fan of the Tramp from Hughes and Kettner that they decided to do a signature amp. The only different I can find is that you get a crocodile tolex covering and the light that lights the whole amp is purple rather than blue. Plus his name is on the box as well. One more thing that impressed me was that Alex doesn't take any money for the royalties of this amp. He donates them to his favorite charity. That is a very noble thing and shows a humility to the man in the best Canadian band in history.

Tone wise there is no difference in this amp then the regular Triamp. Still a great amp and you get all the same great features. This is a great tonal masterpiece.
This amp has three channels and six modes. Each channel has two different modes of operation. For the clean you can get a nice Fender like clean and click the next mode you'll get a British style clean much like a Marshall plexi. On the second channel you have a crunch channel. The first mode is a classic rock tone from a Marshall style voiced amp. Next you have then a hot rodded tone from a Marshall style amp. This gets you great vinatge classic rock tones for music such as AC/DC or Led Zeppelin. The third and final channel you get over the top gain and distortion. The first mode is a hot rodded British gain for most hard rock and metal. Then to top it all off you have an insane amount of gain for the second mode. This mode is for modern playing or dripped tuning. Great for modern metal and hard rock.

At new these amps come in at around $3250, which is a great price for a boutique quality amp with three channels of operation. This is a bit higher than the regular Triamp, but this one is the signature so sports little higher price.

I would recommend this amp to anyone who needs a good versatile amp for gigging or practicing at home. If you do a lot of cover songs then this is the perfect amp for those needs.