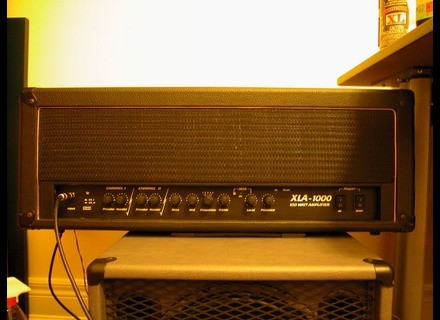 Lee Jackson XLA-1000
3
2 channel, 100 watt, all tube head by Lee Jackson, known for his awesome mods that he used to do on marshalls for metalheads to get extra gain and great shreddy tone.

Both channels have their individual preamp gains and master volumes, with a global presence

EQ is shared, bass middle, treble. There is a frequency knob which adjusts the mids, i think there's about 5 different settings you can have for the mids frequency.

There's also a built in attenuator that you can adjust to get some soaking high gain sounds at low volumes. It's just a single knob that says 'level'.

Effects loop available, and line out as well. I believe mine was tubed with EL34s.

The layout is actually quite simple since it's basically one set of EQS for both channels. Then you can set the amount of gain and the overall volume you want for each channel, and if you want to use the attenuator then you set it, if not you don't need to kick it in.

Here's the most important part!! Lee Jackson has been famous for a very long time due to the mods and a lot of famous artists in the 90s used his modded heads or his production amps for recordings and albums. Why? Cause it sounds good!

The distortion is a very tight, focused distortion. It also has a LOT of gain on tap, SO MUCH gain, perfect for those who like to shred. The tone itself is bright, a bit edgy and raspy. I think it's a great sound for metal or especially downtuned metal. And again, tons of gain so it's perfect. However, it is sort of just a one trick pony. It's just basically one distortion sound and with slight changes in the mids cause of the frequency knob, otherwise it doesn't get you a variety of sounds, just the one that Lee Jackson's famous for.

But it's a two channel, so how's the clean you ask? Pretty much non existent. There is clean, but it breaks up very early and isn't very jangly or anything like that. Even though it's 2 channel it's as if it was designed to be 2 channels of distortion, one being a lower gain than the other sort of thing.

Sounds great. But it's a one trick pony. There isn't really any need for 2 channels if they both do the same thing and none of'em can do clean well enough. So it depends on what you're looking for. If you want the one sound, the famous Lee jackson modded marshall-type sound and you want 2 channels of it this is the head for you. Though if you're looking for the most versatile head, I would look elsewhere.