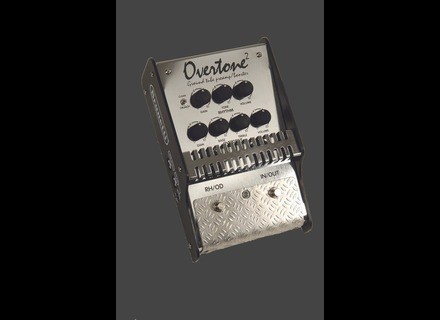 rouliann's review (This content has been automatically translated from French)

Brunetti Overtone 2
5
So it's a preamp lamp, two and a half channels:

One input, two outputs, an output power amplifier and an output amplifier to enter standard switchable direct console in concert.

Atention not to gourrer out otherwise it feels Cram and it's been crying eyes.

Super simple? Nay more than that! You plug it sounds. (Well, for those who want my sound, ie one more than his Hardcore Metal, with some dirty distortion as the Italians know how to do it.)
Button button treble and bass are very effective, as the volume button.

The gain will knob Juska ten,. jme is a 6. The sound is clean enough, the content of saturation is sufficient in a mix but not enough if you want to play at home trankille pieces neo or otherwise. As against a mix friends, ca pete's clear. Its really is a two particulier.On scratch in my nut, it plays engl savage 60 in stack. The two sounds complement each other well. He has a very "medium / high" and I sound jai "peu-médium/basse" two guitars at once with their respective grains generates a sound when its a huge, independently, is nothing compared to Partikulier lovertone power.
Deatheux for the black metal, go your way, '(too light saturation) for the followers of warm, intense kind prancing horse, try, I doubt that you are disappointed.

The clean sound is clear but does not break three brik ... no reverb is nice but it's a little light, the crunch sound a little better now, with half a grain knob it sounds good, but not c fender twin, not much bass, still a bit light this not what then Advanced Member the pedal to its clear to me.

So € 450 for distortion sounds a bit expensive.

The User I live for 7 months and repeated,
I love the distorted sound, I am completely in the clear indiferrent klak it aesthetically.
jai tried everything I could before cowardice, as the distortion or overdrive than fuzz but nothing I like about all this.
Value of production / price excellent value for sound / price a bit light.

But this is the walk total saturation, I do it again even when this choice

Brunetti Overtone 2
5
Prampli guitar lamp (2 12AX7), two and a half channels: a clean (convertible to crunch through a switch), a lead. Two footswitches: on / bypass clean and crunch / lead. A tone on the clean channel, gain, volume, bass rglage one, a lead the acute rglage, more gain and volume. Cts connectors: one between jack, two jack outputs: one to enter directly into a power amp, the other to enter the Tagus prampli an amp or console, a switch can select one or the other.

The stepfather can use simple at first glance. It's not totally true. The rglages as effective, any change has immediate effect on the sound.

For me, the sound is excellent. This prampli dlivre trs a good clear sound and a great crunch. I add that I use with a Gibson Les Paul Signature Gold Top, a Hot Rod Deluxe and a Roland Jazz Chorus 50 according to (it can also be used in direct console, which I did not test. The clean channel, with its two functions, is therefore, I think largely the Mesa V-Twin, as clean as in overdrive. dmarque The Overtone 2 is, however, the latter by its lead channel, trs trs aggressive if rgl in consquence. It is, at once, perfect for metal. So I see as a kind of V-Twin + as much more complete. To add, I plug my OD-808 upstream of Manir that it serves the opportunity to "prsaturation", which gives me, on arrival, a comfortable config: btie as a three channels are added those of Hot Rod ...

This prampli satisfies me.
Did you find this review helpful?yesno
»

See all 7 photos of Brunetti Overtone 2 »