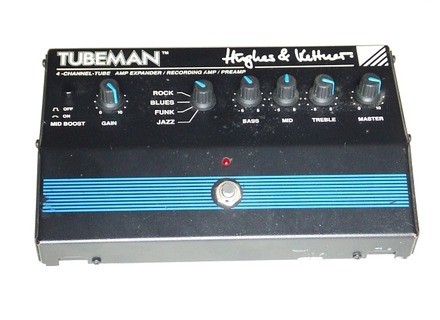 All user reviews for the Hughes & Kettner Tubeman MKI

Average Score:4.3( 4.3/5 based on 6 reviews )
Not satisfied with those reviews?
Our members also liked:

chris061982's review (This content has been automatically translated from French)" I would not have dreamed better!"

To find the sound you want, it's pretty simple, when we know the pedal, there is still time to adapt.

For grain, have love, or not, but me it's the best I've found!

I played with several guitars, I made myself (I made the violin as an amateur) and a vox night train with a 15W 4X12 celestion kustom equipped with baffles.

What I like best is inimitable and grain are the red box built for the recording studio, I add it with two mics on the speaker and adds an enormous precision.

The least is that it blows, but it is mainly a result of adjustment, I found my sound on the blues with the gain channel has almost the bottom, it's ultra rock, with a better dynamic than the rock channel.

My disto official for 10 years I have different distortion and od, but for various things, I worked for several years in the studio right, I found full of groups with lots of distortion, but nothing that I was fact changed his mind.

I love the sound of this preamp on the other hand, and architecture are average, I wish I had the same architecture as the tubman 2, which is perfect, but that does not come close to the ankle (sound level) to my taste.

I was cold for 3 years, because the lamp was tired and a few years ago H & K did not sell their retail lamp, I tested a lot of lights and sounds like none of his original lamp. the blows she finished the closet for almost three years, until the day I found lamps H & K.

Despite these small negative details, its level is the best for me and I rachèterais if a mine has just died.

Florent91's review (This content has been automatically translated from French)" lamp!"

- Lots of heat, the distortion is round, pleasant to listen to (especially the crunch ...)
- I use a Gibson Les Paul Studio with (1994)

- I use this pedal for over a year
- I tried a pedal Rocktron before (in the same price range), nothing to do with the TUBEMAN it day and night!
- I love the blues sound (crunch), I almost never use the position JAZZ
- Unable to find new, I bought 80 € and for that price what can you find a better light? Very good preamp

Hughes & Kettner Tubeman MKI
3
Prampli lamp (1 12AX7), the era (late 80s) c'tait the trick with the most advanced simulation of a stack of three outputs (mixer output). By prampli, one must understand that if this is a marvel pedals distortion issue, it also excels for clean sounds!

The connection between a guitar and includes three output (guitar amp, power amp, mixer). The two dernires cut the sound of the guitar when the effect is dbray and the default is by far the most irritating of the pedals. It is a pity that the output mixer is one that offers the most sound with his INTERESTED simulation stack.

External power is ncessaire the 12AX7 ncessitant AC. it is still a handicap supplmentaire pedals from a battery.

Setup is simple, and we soon find the right fit for his comments on the gain and output volume.

Then there are three corrections Tone plus a MID boost trs not convincing (is not the Mesa Boogie).

L o pedals that excels is the simulation of Stack (mixer output). We really seem to hear a 4x12, smelling a hot lamp and mdiator melted.
And while the headphones! It can happen amp!

For the rest, using the exit "guitar amp", all sound is really enjoyable.

The distortion sounds clean and prcise, you really feel the work of the lamp. This is almost the Mesa Boogie poor (nothing pjoratif the contrary)

The PDAL is trs strong (indestructible?) In 2005 the weakening 12AX7 (volume crazy) and I had to change it, replacement is inconvenient because you have to disassemble the pedals intgralement, knobs and jacks included.

I do not use too much more, a real Mesa Boogie has been replaced.

I urge Fauch a young guitarist who wants the thrill accder lights for cheap and keep their investment without selling it one month to go APRS else.

The manual settings with examples (his Santana, AC / DC, Blues ..)

I use this material for over 12 years is reliable, it sounds, it's hell!
I have a 3 channel Marshall head customized by VHM trs that gives good clear sound and HUGE saturation, a small combo marshall 75 reverb (an amp viel trs cool), the Tubeman allows me to have a different kind of saturation, + sweet (msa / Santana). I use it sometimes on the combo, especially for large saturations crmeuses and solo.
I also played bass on a Gibson amp superbre 3 body, Tubeman also sounds very low.
When I travel or when I have to play away from home, without the possibility to take my guns, the Tubeman is the solution. Compared to the Pod or the Tonelab is the effect that there is a difference, because I Tubeman grain is superb. Modeling low-volume sound good, but when you shoot, you must spend a little time on rglages. So Long Live Tubeman.

Used for 12 years
Convenient, portable ...
Interesting find opportunity, regardless of the MODEL.

Hughes & Kettner Tubeman MKI
5
Pramp guitar lamp (one 12AX7)
A master, a knob to select channels, a TREB, mid, bass & a gain,
4 channels (Jazz, Funk, Blues & Rock)
A Red Box intgre for exit,
1 input, 3 outputs (to Guitar Amp, and to PowerAmp To Mixer)
A switch to enable or disable the preamp.

Cest very simple and basic but not too good this doriginalit pramp adj few years and replaced by the t TubeMan 2nd generations.

Not very practical in concert for there is no switch to turn on the channel DIFFERENT. Not to mention that the volume changes a lot depending on the channel (which is logical given as the Difference of gain).

With regard to the sound of Laney:
Jazz: Its nice clear and warm, it lacks a rverbe.
Funk: The most slamming, Naime I too this kind of sound but its not trs goal cest got a question, I all the same the User to play few pieces of Reggae with Wha
Blues has become the good. Pushed a little on the gain, we did a good rock, Angus Young did that well to keep the Blues AC / DC cest really great, never heard a crunch jai so convincing.
Rock: the distortion is the grain of Lampl (which I do not drang) a big rock sounds trs trs gain was 5 and 8 sounds with trs Trash trs a grain similar to Slayer finally Lampl has a lot to a rgal

When this is bte branch directly to a console:
The clean sounds (Jazz Funk) are fairly close rendering of the branch pramp Lampl, and then ntant not a big fan of crystalline sounds, I dont try too hard either
Blues: the rendering is quite similar to that of Lampl but with less gain (which is the console), damage, but still sounds terrible.
Rock: the grain is totally DIFFERENT from what comes out of Lampl but also exploitable, there is also a decrease in gain but to play the Scorpions or Gunsnroses cest perfect.

In incidental, jOperation just jazz channel (clean sound) with the gain between 4 and 5 and a few pedals (a Boss PW-2 for distortion and a Cry Baby). Its a nice config, easy win but I lack just a delay and a chorus for a wider range of sounds.

Lai I had a few weeks ago for 110 euros doccasion, very cheap for a pramp lamp.
The sounds are his strong point, they are terrible and you can really do anything with this pramp, it is super versatile.
I found a warmth I Navais not with my Vamp Pro but it did not sound pramp too extreme
Only default, select the channel really not practical (with a knob!) And lacks a rverbe (and I'm quibbling)

Basically, a good pramp, cheap Docce, which surprises with its sounds really terrible.
I think all the same to change the lamp for a Sovtek davoir history a little more gain but without changing anything but good dj EST
I would a thousand times that choice.

Hughes & Kettner Tubeman MKI
4
Rackmount guitar preamp with 12AX7 tube not.
4 presets (jazz, funk, blues, rock)
A foot switch that switches on / off the pedal (when it's off to the sound of the guitar does not pass!)
pots gain control, bass, middle, treble, volume, and switch to boost the mids
TS connections: between a guitar, a headphone output, 1 output amplifier, a mixer output
Making power (watch the original power supply is a bit feeble and if you replace it must be the 9v AC (very important!)

The config is very simple
You choose what style you want his (jazz, funk, blues, rock) you set the gain and volume your convenience as well as pots and sounds of Tone!
The problem with this pedal is that you can not leave the ground because you have all the time tweaking the pots (rotary switch to change the presets). I say because you can not preset channels that since we can not change them while playing. Problem solved on tubeman 2.
All fawns my opinion it is a preamp homestudio East, not scene.

L is meaningless, and even sounds a very bien.On can really have any kind of ultra clean sound of the funky killer distortion! It's great for blues The gain is very gradual to find a good crunch!
I use it with a strato "all black" tubeman 1977 and is connected to my console (Akai mg 614) and I'm super happy. I also connect to the lower register and is also excellent!

I've had ten years and is an excellent preamp (same attention when the dust in the pots I clean 1 or 2 times a year).
The pros: the sound or sounds (it's not a pod with 200 presets even when)
simple but effective

the -: not used on stage
when the switch is off the sound of the guitar does not pass (a lousy!)