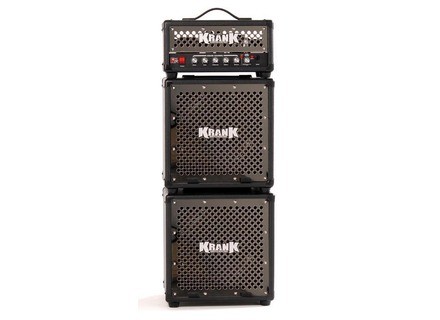 Krank Amplification Rev JR
3
Objective analysis:
This is a 20W all-tube amplifier, it is dual channel, the equalizer came down to a volume knob for the "Kleen" and setting a sweep, volume, a classic 3-band eq for channel and a volume of this channel and a boost switch! It is covered with a black Tolex arbord a chrome front. At the rear there are two speaker outputs with impedance setting and connectors, which, it seems, used to connect an effect section.

Analysis:
Amp well built, very stable, it supports me to be standing above what is already a good thing! Potentiometers and other components of quality! No footswitch which is bad!

(7) nothing special, except that it is a low power amp for practice and studio, suddenly, it becomes special, as the amps surprimitifs abound in this category. Indeed, few amps offer a section as complete equa effects loop or worthy of the name!

Yes, configuration is simple, but can not imagine a good sound out immediately. It was soon surprised by the possibilities of the small head and setting options allow to obtain sounds very / too extreme if it is to side.

I regret the absence of any equalization for Kleen, which makes us dependent on the guitar and used his power to be good at low volume!

The lack of a footswitch also makes things difficult if you want to use it for the stage (which he could theoretically do so, it has enough volume for this), we will have to make constant trips if wants to change specific sound (but the owners of vintage marshalls are already familiar).

(5) Pretty basic at the start, quickly head appears more complicated than it seems and inflexible for some applications

The Kleen first. Although hot enough, it has a small side crunchouillard that, if he wants to be fought, requests to set the guitar input properly. It can quickly become nasal when the instrument is bad, owners of cheap guitars, think to buy!

Krank channel gives me this sounds to me fairly excited. We find the spirit of the revolution but with a sound a little different. We must set out the course and I think some will enjoy more leg than I sound, but, for example, the settings with a sweep rate is too high chemical, the boost "Pok" each time it activates or that the off, he adds, moreover, a lot of acrimony with fuzzy, which, if you want a more natural, then asked to rework the equalizer.

Saturation seemed unnatural, too push-beyond a certain level of gain, one must be careful if you want to have a result yet qualifiable beautiful. By-cons, it never falls into the stamps that sound aluminum and are the prerogative of amps lamps, entry-level, we are here in front of an already serious.

If we meet this head and it is studied, is obtained, however, a plethora of good sounds. The momentum is there, it does not sound cheap (except in kleen), it offers a gain and a particular grain, with tight, according to the settings, a character quite fuzzy in the lower midrange. Add to this a very good performance in the description of a sound and solid bass. But mistrust, the grain "in casting special" must be analyzed before the amp before deciding, you might be disappointed!

The sound is powerful for the Sufis live to see a repeat interior 2 suffice to already be strong and begin to exploit the nature of the lamps. Note that the character gets better at high volume!

(7) not obvious, it is superior to many heads in its price range but requires a power user!

The note refers to the category of mini amps rehearsal! In this context, it is pleasant and a nice instrument for experimentation. The sounds are original and really out of ordinary people which will make it interesting for experimental sound. The rain overtones abound, but the price is, in Switzerland, very high (1650 CHF) and discourage the amateur, which, in general, is the first fond of this stuff! Note that for 200 .- more than the Swiss price, I can build a signature in a head amp custom factor, see, for the same price, I find a correct MesaBoogie two channels in good condition as a result, Fortunately, my note is limited to mini-amps or it would suffer even more in the rankings.

(6) Not really conclusive for me, it remains a worthwhile investment!

Neo_Rock's review (This content has been automatically translated from French)

Krank Amplification Rev JR
5
I availing oneself of this amp for 1 year. Purchased with Universal Guitar Paris / Pigalle with its 1x12 cabinet

- What is the power dlivre?

25 watts (which is what is written on the documentation supplied with the amp)
! Enough for group play! I&#39;ve never pushed back.

2 channel switchable by a selector in facade.
- A channel Kleen with only a volume control. No EQ.
- A channel with a Krank standard EQ (bass / med / high), displaces a sweep for the band of medium frequency drives. The volume knob Kleen channel becomes knob gain, a knob for master volume ddi.
- Both channels are boostable by a small boost button.
Kleen channel without boost: clear sound
Kleen channel + boost: clear sound that saturates a little, but much more dynamic and medium.
krank channel without boost: From Crunch to rock to heavy metal show nerv era.
Krank channel + boost: the most modern heavy metal until a saturation level which dboite very current.

I removed one because there is no footswitch possible, and the volume of the channel becomes clear that knob gain (you can imagine when you switch from a mega Kleen disto ...)

- The configuration is simple?

The setup is very simple.

- Do you get easily a good sound?

Like any amp lamps, there are some subtleties that must be apprehensive. In terms of this amp, the more you put medium and the sound is better. APRS is a matter of taste. Otherwise yes, it is easy to get a good sound.
Small details, I only speak the Krank channel because the channel Kleen is not adjustable.

A single sheet is provided. Above, there is a detailed descriptions of the amp and some notes on In the way of using it. English course.

I retired as a channel Kleen is not adjustable.

- Should your style of music?

During the year, no effect.

The Kleen channel is very cool I think. It is highly neutral, neither too flashy nor too crystalline. It&#39;s the lack of rglages.
With the boost is the same, but more showy. But everything can be fixed with a pedal or rack qualisation.

Krank channel is very rock. The sound is very rockayeux and medium. This is what characterizes the amps krank is cluck their medium. This fact is apparent in the mix as well as better training. However it has to take the necessary push the medium. Logical right?
When you push the medium until 5, I think the guitar really has no presence, but from 5 to change everything.
Then thanks to knob Sweep, you can have a low medium or high are medium, ie fat and dug or with more acute and presence throughout. A knob is very convenient but with time I do I never go below 4 or above 7. Beyond the sound is too loud or too closed. Other qualities: his warm and straight.

Same thing for the Krank channel + boost. A few diffrence prt: More gain, more presence, has not ring-a honeycomb is very specific on the distortion and warm. Many will say that there is not enough gain at the end of race is wrong! Because beyond will no longer distinguish what you day! This is the caractristique Premire of this amp: The precision. A clear, precise, warm. Then, between each riff there is no noise. It&#39;s like if there was a small noise gate intgr it. I also want Specifies that a whole, the distortion of this amp is really even when compressed while retaining the dynamics.
Clearly if you play or the Meshuggah Mnemic ago via s&#39;clater.

- What are the sounds you prfrez that hates you?

I hates to be dug or equa V is even worse with this amp. Also, I tried to used the effects loop with various pedals: crap! The sound kind of small HP macdrive macdo home. So -1.
I like his presents and rock. Small + o for serious tuning this amp is gnial.

- For how long have you been using it?

- What is the specific feature you like best, the least?

+ The distortion is gnial rock and metal. The true sound Krank.
+ The sweep.
+ The two outputs to the speakers history pter (and his back)
+ Finally an amp Hi Gain 25 watt All Tube!
- Over time, my tastes with Volusion, I find this amp a little too "Hi Fi" and a little too creusdans the medium sometimes.
- No rglage canal Kleen.
- No footswitch.
Effects loop-rots.

I played on the biggest studio (amp that I do not availing oneself). Mesa Dual rectify, 5150, Marshall JCM900.
One day I tried a Krank Revolution Series 1 and i fell in love with the distortion. Since I could not afford to offer me this amp, I turned to the Rev. JR which owns circuit distortion strongly inspired ort 1.

820 Euros for the head + 1x12 cabinet.
Everything is mounted hand, the baffle is made of birch and has an Eminence Legend V12.
Report qualitprix very good.

- With the exprience, you do again this election? ...

If you recognize yourself in all that you and your opinion in the same case as me the era (not enough tune and need a good distortion), go there with confidence. However, it was not there the most complete version of the Krank Rev Jr. is the Pro version. Inquire when same, may be intressant.

Contents of my tastes in disto with Volusion, I handed the quest of the big sound. The Kleen channel with a very clear sound neutral, I have a branch prampli TN P1 that mimics the distortion of a Peavey 5150. The sound is dmentiel. And being a fan of Devin Townsend, I also plugged in a facade delay (EH), the pinnacle, I m&#39;clate ...