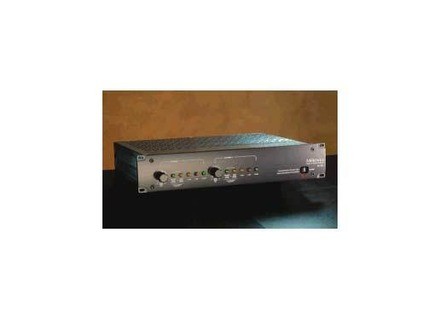 Millennia M-2B
5
The Millennia M-2B is a dual channel vacuum tube based microphone preamplifier. The unit is quite large and will take up two spaces in a traditional rack. It is made up of all analog components, and I'm not sure exactly the types of connections it has in the back since the one that I used was already racked.

Using the Millennia M-2B is a very simple experience. If you know a little bit about mic preamps and the basic parameters that are seen with them, you'll catch on quickly here. The unit has a large gain trim knob, along with buttons for a few different gain range options, as well as for +130v power, phantom power, and phase. So as you can see, if you know about mic pres, this is a fairly simple set up to get used to. I haven't seen a manual for the Millennia M-2B, so I can't say anything about its make up, but I don't think one is needed anyway.

As far as tube based mic preamps go, and preamps in general, the Millennia M-2B is one of the best that I have heard or used. It has a thick, round, and overall full bodied tone that boasts depth as well as both clarity and warmth. This is the real deal, as it doesn't get too much better. I have used the pres for recording vocals for the most part, but also liked the sound of them on electric guitar and kick drum. Although I've yet to have the chance to use it extensively, I would bet just about any amount of money that it would excel in any situation you threw at it.

Of course as with all special pieces of outboard gear like the Millennia M-2B, comes a steep price. This is absolutely only intended for professional studios, or perhaps for the larger home studio owner looking for a set of top end mic pres to sit on top of their rack. It will cost a pretty penny, but then again the M-2B is stacked with an incredible sound and all of the features you could ask for...
Did you find this review helpful?yesno
»