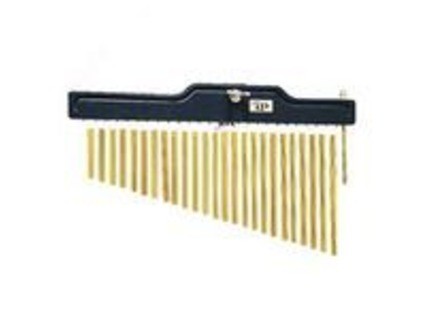 All user reviews for the Lp Chimes

Average Score:5.0(5/5 based on 1 review)
Not satisfied with those reviews?

Lp Chimes
5
I've been using the LP Chimes for a few years, although I've only used them a few times for recording.  I have used them at a recording studio that I sometimes go to as they have a great collection of percussion instruments, including this one.  While I always try to use chimes sparingly as I find that using them too much kills their purpose, when I do use them this model has always gotten the job done for me.  It has a clean sound quality and is one that isn't overwhelming, which can be a problem with other models of these types of chimes.  For recording I will usually through up a small diaphragm condenser microphone like a Neumann KM 184 or even a large diaphragm one like a Neumann U 87 as these will pick up all of the subtleties of the instrument.  While most people associate the chimes with orchestral music, I have found that when used tastefully that they can really work with all sorts of music including pop and rock, among other genres.  Even if you aren't a percussionist or drummer, as I am not, just about anyone can play this as long as you know the right stop to put it in and for this reason I would definitely recommend studio owners to have one of these as you never know when you might want to try it out on a song.  Like most of LP's catalog, the Chimes aren't expensive and are definitely in everyone's budget granted that you want it and that you have a budget!  If you are looking for a set of chimes I would definitely have to recommend LP's version over any other because the price is right and it sounds great.  All in all, this is another great percussion instrument brought to you by the best in the business.