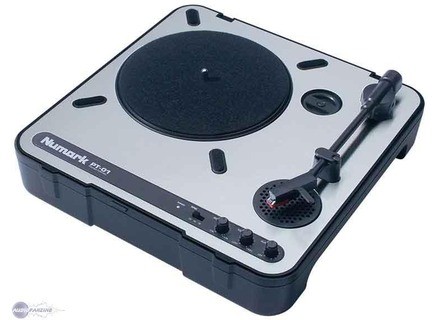 View other reviews for this product:
Here is the opinion on the mysterious PT01

So first things first:
Carton of the gear not too bulky, easy to carry, with a handful, but who cares, it will quickly go to the trash (it says for the metro is handy when you have already two other bags. ..)
Opening. The deck is pretty well packed. Finally, we end up with a black box, a thick but chouilla actually compact. On top, a circle widened slightly with the trademark logo. Below, a brochure for batteries, and a bar for transport, which could have been better placed for a little annoying to open the battery bay. Speaking of batteries, I was very disappointed format D! That means big batteries, expensive, hard to find, and that increase greatly the machine. On the front, a small zipper registered with an arrow and "open". Any logical sum, I pull the zipper in the direction of the arrow, then the hood (note: it is quite annoying to close, it must dip the trick.). I then unfolds the plate:
the finish is good, the style of the arm is not too much in my taste ... one gets the impression of a 3D model not over. In terms of antiskating, balance, etc. is already very close, and it fits nicely in the groove without cutting it in half. The adapter 45tours, well established, that does not wriggling ... the board has felt stuck, and 4 "batonets" which are for that ... So do not try to remove it to make yours! Buttons: the selector 33/45/78, a pitch knob, one tone knob, one for the volume. As for the Start up, could hardly be simpler: just aproach the arm of vynile placed on the tray, and it restarts the caterpillar ...
For connectivity, there's what is: jack, mini jack, line out, power supply (yes, we numark completely through a power supply ... thank you) and then the power button.
In terms of sound quality: good, low saturations ... but like the Vestax for the cell, it is a special model. Once the vinyl installed, be careful not to fiddle too much: even a slight touch will affect the speed easily. But rest assured, the couple is good, it will instantly to the initial speed is not a Gemini XL500. For the pitch, I do not use it too, but it responds quickly and well.
As for the stability of the device, it is good too, I put on fund vinyl records, on my knees in the station on a bench on the shelf of tgv ... it fits comfortably and does not play.
For the value, it is very good. If I had the choice again, I think I still take the handy trax, as I travel between Britain and Paris, and it's not nice to have something super heavy to lug around ... but I do not regret my PT01 so far away from! I think it's primarily a question of money and taste.
So I give him a score of 8 for these small defects not dramatic, but it could have been avoided easily ...
Finally, yes, you can tell, the Numark PT01, as his mother the Vestax Handy Trax - since the first is a cover of the second - is a plate made for all bargain hunters of vinyl records and / or owners of 78 rpm