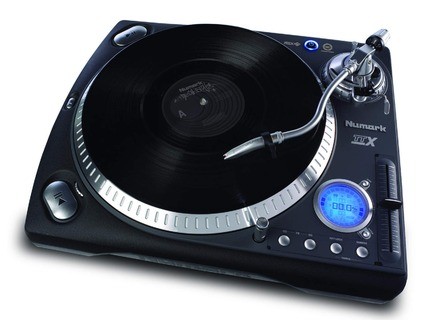 TTX, Turntable from Numark in the TT series.

Numark TTX
5
The features on this deck include the most torque available on any pro dj deck. That means its starts, breaks, slows down, and speeds up faster than a technic 1200. Speaking of speed there is a 50% pitch adjustment. Most people would not care about this but combined with its key adjustement feature this deck is awesome to cross blend music genres like house and hip hop, jungle and house etc. You can also change the key of a song while maintaining the original or altered tempo. This means you can give a a lyricist with a high pitch voice a deep voice and still be able to mix there song at the original speed. The deck also features lineoutput, phono output, digital out put, interchangeable tone arms, beat counter, weighs a ton so its not susceptible to skipping due to vibration, and a bunch of other shit thats dope.

The deck sounds aweome. The only thing i dont like about it is that it weighs a ton so carrying them around is a drag. Also, when scratching you have to lower the bass a bit more than you would normally on a technic so you dont hear the thump of your hand as it grabs the vinyl.

The ttx1 is mad easy to use. The only thing you might need the manual for is to figure out how to adjust the key.

Robust is an understatement. This deck appears to be a tank. Don't worry about a wobbly platter, this baby is crazy stable. Of course, these are just my opinons based on my own personal experience. Still i would encourage people looking for some pro quality turntable to check these out.

The turntable is plain and simply ill. Technic purists won't here it but if your not a 1200 snob and want more features from your deck than tech has to offer, you'll want to check it out. Its been awesome in the studio and on the road. I guess in time we will findoout how fat this deck really is, but in the mean time it offers everything tech offers and then some. And at onlly $379 you cant go wrong. PS: Numarks PPD01 Mixer sucks ass, but thats another review. Peace. E

Originally posted on FutureProducers.com
Posted by: Unknown ( 4-, 2003)
Did you find this review helpful?yesno
»

Numark TTX
5
This has all the features you could want. Everything on it I have found useful, except the BPM counter which I never would use anyways, but it is definatly off. Does it effect the rating though? Not at all. This table is still dope. the pitch adjust is very accurate and surprising very useful, especially if you drop it down on the right track and want to get a nice bass boooom. Reverse has been useful for scratching as is the interchangable tone arms. I use the straight when scratching and if playing over a beat on another record I use the s tone arm. People talk about the record wear and sound quality of a straight arm causing problems, but I don't notice a considerable amount of difference in this, and if your a scratch dj you are definatly not afraid of record wear.. you can't treat them like babies ya know? This deck has the perfect features tho... I sold my techs after getting this. There is nothing missing.

Perfect, no problem what so ever. Unlike the PDX2000, I think this turntable could be universally accepted by turntablist and mix dj's because of the tone arm system. Most mix dj's may not find as much use for the features (still some would be handy) as a scratch dj would, but it is cheaper and built stronger then techs, so why not give it a shot?

Very easy, very ergonamic setup. It has been made so that it works perfectly for someone using it battle style or tradional style. The manual reads very easily and explains things nicely.

I have lugged it around and unfortunatly even dropped it about 3 feet once, it freaked me out, but it had no damage. It is a metal table like techs, but powder coated on the outside so it doesn't get scratched as easily as techs. It is even heavier then a techs which some people may not like but I have no problem with it. It is a tank. I've never had to contact customer support. Only beef is the target light could have been brighter, but i changed the light and now its fine.

I loved it enough that after buying one (because I was skeptical) and abusing it for several months I sold my other 1210 (no need for them now) and bought another ttx1. This table has everything a tech has and more, and a better price. I personally think it is the best on the market right now. I don't think anyone can go wrong with a 1200 or a pdx2000, all are good tables, but if your innovative and into scratch music then the pdx is far better then a 1200, and if your into mixing the pdx falls short because some people are skeptical of it being plastic, have heard of it having a wobbly platter, and also has only the straight arm. The ttx1 fits perfectly in the middle of this. It has the best of both worlds AND some with the extra features. i love this deck... i don't think i'll ever need a new table again.. but i am still open to try new things so who knows...

Numark TTX
5
The TTX has more features than all other Turntables that I have come across. The auto BPM is a bit touchy and doesn't always work.

The sound that comes out is Great, I haven't found any better Turntable

The manual..... has almost nothing, The interface is amazing however, and easy to use. Since this turntable can be adjusted easly it is good for any one

It is good enough to be used anywhere! The lights underneath make it easy for hookin up in a dark warehouse, or club. The buttons are easy to use, however the brake and start up speed knobs are too close to the start/stop buttons

I will never go back to Tech 1200s after using this, Its amazing!

Numark TTX
5
This turntable has all the features needed for a great turntable and more. The BPM counter helps a great deal, but seems useful only with music with distinct peaks such as house or trance. Other Pluses include exchangable S and straight arm, pitch adjustable to +or- 50%, adjustable start and stop speed, etc...

The tables are great for any type of music and sound does not suffer at all. There is no audible &quot;buzz&quot; that you may get with ungrounded turntables and the build is solid enough to absorb stray vibrations or soundCompared to the Technics' beloved 1200, this is just that and more.

Its a turntable. Theres not much to learn. You can go through the manual just to go over the details on the decks, but there isn't much that is new to learn. The most difficult part may be changing out the tonearms and pitch adjust, but even that is not hard at all.

If you can use a 1200 at a club or party, then you can definately use this. It's admittingly heavier than other comparable tables, but it's worth the extra effort to carry these decks around.

I tried this out to compare them to the 1200s and I can't turn back. I recommended these tables to a couple of friends, all of who have previously used the 1200s, and they have converted. Try em out and see for yourself.

Originally posted on FutureProducers.com
Posted by: Unknown (January 2-, 2003)
Did you find this review helpful?yesno
»
Read the 46 user reviews on the Numark TTX »

View all 2 videos of Numark TTX »

Numark TTX manuals and other files