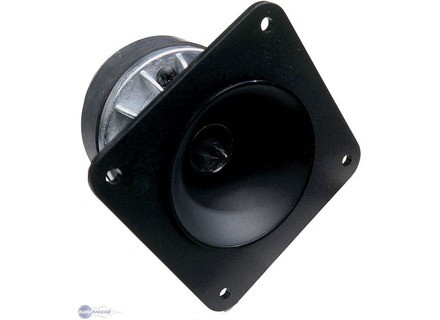 Eminence APT:80
4
(Originally written by rod 971/translated from Audiofanzine FR)
Great tweeter considering its price. You don't have a big budget? Don't look any further! Almost as expensive as the piezo tweeters I formerly used but way better...

Very pleasant sound for vocals, string instruments and even wind instruments (I used to hear a lot of symphonic music). Very good power handling. Can be mounted on 250-watt loudspeaker systems or even more with a well set crossover (cut-off frequency at 5 kHz if you use a 2nd order crossover).

Ideal for compact 2-way loudspeakers with a low-mid woofer plus a 15" subwoofer. This setup provides a very pleasant and affordable compact system.
Did you find this review helpful?yesno
»

Eminence APT:80
5
I bought a pair to replace Piezo in columns 2x38 KOOL SOUND (BBX 215)
Used primarily to techno in a 3-way soundsystème.
Filter matched 2-way cut to 3.5 kHz.
Tweeters hold up well and rendering power is light years away from a piezo, while remaining the same size which allowed me to avoid any modification on my speakers.

The frequency curve is neutral.
The highs are fine and clean, burr-free!
Has a slight hollow of my setup because there is nothing between 38 and 80 APT but has a little catching up the equalizer and the sound is good!

I use it for almost 1 year and I am very satisfied! The difference with piezo well worth the 23.90 euros! Only for those who want to like me, do not forget to buy a passive filter suitable for low-end speakers like mine are not equipped!
What I like most: the price, the sound and the fact that they are the same size as the piezo '' bullet ''.
What I like least: For the moment I do not see ... can be a bit aggressive if you tend to push the treble!
Excellent value for money!
If I had to take small acute for single use without taking my head, or replacement piezo I would do this election recess.

Jr@'s review (This content has been automatically translated from French)

Eminence APT:80
5
Here are the CHARACTERISTICS of the tweeter

This tweeter replaces trs out any piezo tweeter grace these dimensions.

The sound is not great but still trs honnte although I find it a bit aggressive. The directivity is short.

Tweeter reasonably priced and convenient to rebuild low-end speakers. Or even to make Creations home.

For speakers of good powers board I use several.

A note that the replacement of membranes available in case you with the nags jou: p
Did you find this review helpful?yesno
»

ravageor's review (This content has been automatically translated from French)

Eminence APT:80
4
- What technical specifications motivated your choice?
the case of an EMT 133 (attandant in the new membranes)

- For what purpose?
currently mounted in acute reinforcement in place of piezos in Cerwin Vega V32

- What amp / What configuration? ...
reinforce the tubes 2 inches in cerwin / also tried in a game of rythmic (too aggressive)
pousss crown by a DC-300A

- The curve frequency drives is it neutral enough?
bench with a break-directional active and aggressive front is then mounted on liabilities (as amended) of cerwinV32 whispering that it's more broken ears

- Stereo image is good?
It depends on how the heads are placed when it is otherwise it's quite possible sympathoche

- The sound is clear and prcis across the spectrum?
yes in my config it's going to complete the ca 2 inches without being too aggressive

- The dynamic is it respect? ...
heuuu compared to the fire "emt-133" carrment .... no one feels the least when a half inch even as he announced a spl equivalent

Cons: bha ... the thread of the square flag plastoc can (I have glued with AUTOJOINT blue)

- Have you tried many other models before acqurir?
yes I have tried many

- With the exprience, you do again this choice? ...
bin for 34 with the pavilion's not ruin this remake so I choose reinforcements to complete a treble chateau low meduim and breaks cheap (when it breaks

)
Did you find this review helpful?yesno
»
Read the 6 user reviews on the Eminence APT:80 »