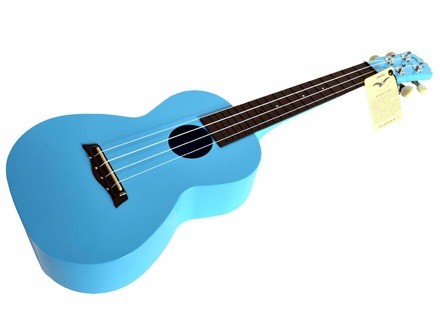 Anonymous 's review"Can I score it no Stars?"

My one was branded Clearwater but I have seen a lot of other people selling the same model of Ukulele under different Brand Names. Korala and Brunswick are two more but I'm sure there are others and Lanyao sell them under their own Vorson branding. Sometimes they are a single colour sometimes that are graphics on the front.

It has a red all plastic body with a red plastic neck and headstock, a black plastic bridge with a white plastic saddle and a black plastic fretboard. The neck meets the body at the 14th fret and the fret board continues over the body to 18 frets, the frets themselves are plastic and moulded into the board, but there are 4 white markers on the 5th, 7th, 10th and 12th frets that are inlaid separately. The tuners are open geared, 14-1 (or there about) and have cream plastic buttons, (a different kind of plastic). It has a scale length of 37½cm (13¾ in), so a Concert with a fairly traditional figure 8 body shape, moulded plastic fan bracing under the sound board and quite a narrow headstock with a Clearwater decal logo in it. Finally as the advert for it promised it came with Aquila Nygut strings - so it looks like a Ukulele, but smells like a washing up bowl, and here's where it all starts to go wrong, sounds like a washing up bowl too!

Up close the build, though very solid feeling, is not great, there are noticeable ridges where the soundboard is not glued exactly onto the back and sides body shell. The tuners are not very smooth either and give those experiences where you turn and turn with nothing happening then you turn a little more and it goes up half a tone. The biggest issue though, because after all it was very cheap and manufacturing flaws like that are to be expected, is the neck is not straight. There is a noticeable bowing when you look at it side on and this leads to a very high action from about the 4th fret onward making it a very awkward and unforgiving player. It also puts the intonation out as you go up the fretboard, not that you would want to much as the action is so high. And then you come back to that other BIG issue the sound.

Despite the effort made putting fan bracing in on the soundboard it still sounds like someone has put rubber bands around a washing up bowl. There is no treble, very little bass and no sustain, (probably a good thing, you wouldn't want to torture the notes any more by dragging them out for to long). This leads to a very muddy, percussive thunk when you play it. Its sound is also not well balanced, the C string for example comes across much louder than the A string (probably not helping with the tone) and this gives a real lack of chord definition.

Given its plastic nature I do fear this Ukulele will last... Forever! In millennia to come when the human race is all but forgotten and the dominant species on the planet is the super intelligent, highly evolved descendants of the Humboldt Squid, who are making their first exploratory forays onto land. They won't find the Taj Mahal, the Mona Lisa or even a copy of Photographers Monthly from 1993, but they will find one of these Ukuleles, string it up, strum it and think "Blimey those monkeys were cloth eared! and we don't even have auditory organs!"

That said I think if you left it in the back of a car it would melt and if you got it wet the tuners would rust. All in all this is pretty horrible It's an awful choice as a first Uke given its tone and unpleasantness to play and I don't think it would be a particularly good take anywhere beater. Sad really I have a couple of other Clearwater Ukuleles and I think they are really good. I was hoping for more. The new Maccaferri Islander this isn't.

In the end I have given this away - to someone I didn't like much. I did have a good long go on it before I gave it away to see if it had improved any, if I thought I was being too harsh on it and if I should write anything positive for its final epitaph; and the answers are no, no and no! No its not got any better, if anything its worse. The tuners which were never great have developed a nasty grinding to them like they have got sand in the works(?) but it has never been near sand, possibly it could have been solved with a good oiling? I'll never know now I didn't have any oil to hand at the time and I wasn't going to get some specially (and none of my other budget Ukuleles with open gear tuners have ever developed this fault?). The neck didn't appear to get any worse, but it didn't miraculously get any better and the tone didn't improve either again it would be fairly miraculous if it did. So no I wasn't too harsh in my original assessment and the only thing good I can say as a farewell note is good riddance...
Did you find this review helpful?yesno
»