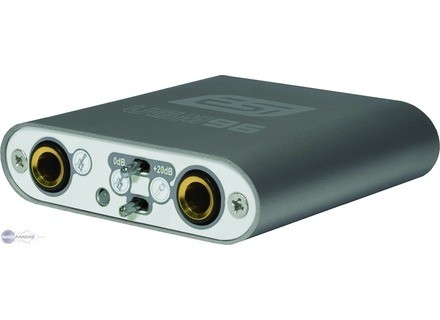 All user reviews for the ESI UGM 96

pico's review (This content has been automatically translated from French)" Really Useful!"

ESI UGM 96
5
I use the output of digital mixer, to control the vst and mobile use. Drivers

extremely stable! I can not believe I took the 48-ms (the same as for RME) without acros what is really comfortable to play midi with the audio without the fuss.

For information you can record in stereo or 2 mono with one of the entries to choose the gain level for a record from a microphone for voice, for example, personally I used the output of digital mixer, I therefore remains in stereo mode.

The sound quality is clear for me, I would say very good.

The nice thing is that we to 2 stereo outputs, which offer the possibility to use 2 headphones, by against the output level is global, it is the only flaw I noticed this product, so I removed 1 point but it's really to quibble.

Super simple, you part, you play

I use since June 2010 and I intend to take a second to equip a computer keyboard + full of VST that for value for money there is no equivalent.

angelworld's review (This content has been automatically translated from French)

ESI UGM 96
5
Small USB interface, and I must admit it has charm. Two input and two output jacks, with input an entry for instrument and microphone input. Note that both inputs can not operate at the same time, a small serving selector lever mic / instrument. At the outlets, there is a line output and headphone output.
I tested the interface on a macbook and an imac, and I have so far only used the guitar input, playing mostly punk rock / pop punk.
My guitar is a Squier '51 with micro seymour duncan SH-4, which I coupled with the amp simulation Waves GTR 3. I'm not going to beat around the bush: I think the sound is very good, I really rediscovered the simulation. In fact, I think the real advantage of this interface is to have a really excellent result, immediately.

Drivers? I remember simply plugging the little beast, launched Logic and presto!
Latency level, I do not know the exact value, but 96kHz/24bits latency is very low (we do not perceive, at least not me).
No stability problem with Snow Leopard 10.6.3 and Logic 9.1.1
I put 8 because I have not tested under Windows, maybe someone else will!

As I said above, no problem installing. The beast comes with Cubase 4 and Studio Devil amp simulation, nice little bundle!
I did not need the manual, which if I remember correctly in English, but anyway, no need!

I use very little, not much time right now. I bought a PRS Interface Waves, a little art tube coupled to a MP Julia, and I get really excellent results with this interface.
I really like its design, performance (96KHz, 24bit is fine!), And I would do this choice with your eyes closed! It is a true jewel for the mobile user (yes, I had purchased my laptop, but now I use it on my Mac "fixed" too).
Value for money unbeatable for me, what more?