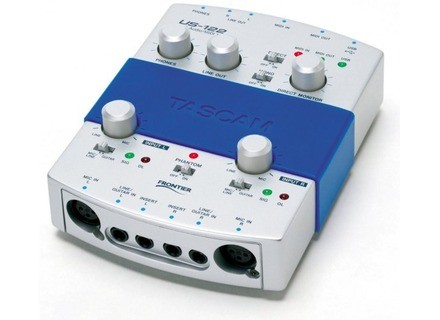 View other reviews for this product:
I needed a map to record not too CHRE BMD (something not too prtentions so) for my group: 2 between me enough to rcuprer battery pr mix on a mixer and pramplis Intgr should allow me to register then sparment vocals, bass and guitar (later withdrawals soft). Moreover, as I had to carry and use it on multiple PCs, a USB connection seemed to be a good choice.
The tascam rpondait all these needs and especially in its price range, it&#39;s only equipped with silent pramplis Intgr.
It is essentially a matter of budget and mobility led me to choose what SPECIFICATIONS MODEL with (24-bit / 48 kHz) are not too got the day with plenty maps 24bits/96 Khz. APRS is all about needs

Installation is fairly simple as most USB peripherals.
The configuration of the card is not very complicated, so given the limited rglages foun: one can simply activitdsactiv the audio stream (to allow the bandwidth to the south) and r Gler buffer size.
The fact that there is not a ton of options is not at all because the card works Gnant trs well without a lot of tweaking parameter.
The manual is pretty clear ... but it is only available in pdf ...
A point when even trsngatif: the dsinstalleur is anything but clean: it leaves open the file up with a panel in the control panel that is no longer there. Rsultat our friends tascam explains in a note as to transfer the rest, it must be done by hand, the worse they do not give the file names but advise the use of search windows ...

I had no problem of stability or compatibility of the drivers (I installed the latest version IMMEDIATE site tascam). Apparently they are being updated from time to time.
I mainly use SONAR for recording with a lot of virtual instruments. Latency is always obtained infrieure 10ms, this level, no time limit seen in the game with a MIDI keyboard, for example.
For the number of tracks, I have not worked with over 6 tracks in reading and 2 (mono) recording (the card has only 2 inputs ...). Any fawn, this settings has more do with the power of the machine or squenceur.
In use, the card has been fairly stable over a growth record of 4 hours, I had a single dropout in sonar. on the other hand, in use on Windows 2000 multimedia card has a rvl be Calame: cuts his ds that the pc is too sollicit (scroll a web page type) and no matter what the size of the buffer.
XP is much better but still cuts from time to time (you will tell me that is not like a sound card to play mp3s but the diffrence in quality is such a relative intgre sound card you want to use more than a
Speaking of quality of its precisely the tascam converters do not worth sr MODELS upscale but they do a good job and if this is your first hardware a shallow, IMMEDIATE sentire you the difference.
For cons, the pramplis are a little weak people, is compensated on a one vote, but on a guitar part live sound is "soft", you lose normment in brightness and it is not putting a soft kind of returns that amplitude a.
I t&#39;s enough on this point because of prsence pramplis jou was a lot of my choice and I glimpse in the end I would be obliged to add a case of direct or external prampli.

Now for the things that upset: my copy of a default tascam 122 possde innaceptable When I put the headphones back (and the drummer get along, it takes at least a), the also records from it. Rsultat once the track amplifies means trs clearly sent the metronome click in the headphones. In short the card is totally unusable.

I e-mailed tascam whether this silent problem rpertori (another member of Audiofanzine had exactly the same) and it was only a s Series borked. In this case I just changed the card. My application is still not rponses and seeing the many problem that people encounter with this card, I finally DCID of change against an other models.

O The shop I made my purchase so refers to the map dfectueuse tascam of Service: APRS rsultat two weeks after sales service has given no new and responsible is unreachable at tl phone.

Frankly this card is to play Russian roulette: if it works, it makes things right for its price range (o to 7, for the note) but if it fair, do not expect you to tascam help (wish to under 0 but good use is not to judge on the VAS).

I tried it one week and did two recording sessions with.
The quality is correct ... for the price. The one and only default is that tascam does not respect its customers by knowingly selling what for me is very much like a borked SERIES, by not not meet the requests for information and then making fun lss customers with a sav absent subscribers (the store, which shall remain nameless, I also suggested that the lack of tascam Ractive does not surprise and it&#39;s the polished version of what they told me)
If c&#39;tait again, I would take a PCI card (type delta 44). If you need mobility of the Audiophile USB is the same price but it does not pramplis (given the quality of the tascam pramplis basically you lose very little, as SAVE a little and take real pramps) to the slightly more expensive firewire 410. AND M-Audio, the sav rput is not for nothing, I was rponse my questions in less than an hour.
See the source
Did you find this review helpful?yesno