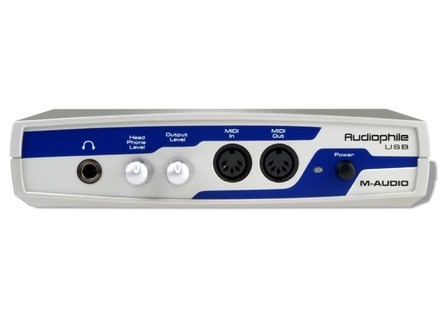 M-Audio Audiophile USB
4
The M Audio Audiophile USB was purchased for 200 dollars which is a decent price point for this interface, its not over priced but not under priced either. It was a perfect interface for my home set up during the few months that I was using it. The sound that it gave me was pretty good, there really isn’t much to argue about with it. I came across the Audiophile after seeing it in computer maize years ago and decided to give it a shot. it’s a really easy connection to your PC via USB and has 2 pairs of line audio inputs RCA and 2 line audio outputs RCA. The Latency is pretty low, but you can still notice it with the naked ear a little bit. But its not enough to be a deal breaker. I think the Audiophile would be perfect for a beginner because its affordable and will still give you something decent you can start with.

I experienced no updates on drivers while using it, and the latency is minimal. I use the Audiophile USB with Cubase the most and it works great. I only record simple 1 tracks at a time and they are mainly vocals.

I experienced no updates on drivers while using it, and the latency is minimal. I use the Audiophile USB with Cubase the most and it works great. I only record simple 1 tracks at a time and they are mainly vocals.

The price of it is what I liked the most, it was affordable and even when I traded back in to Guitar Center they pretty much gave me back 75 percent of what I paid for it which was great because I held its value. I am happy that I chose to use this interface for a short while when I needed to. The quality of sound was very solid for a 200 dollar interface.

Convulsound.com's review (This content has been automatically translated from French)

M-Audio Audiophile USB
1
- Listen to Ben and the basic characteristics ca appears to go there all the SPDIF brief and I pass the details ca appears to be niquel to make the recording computer
- Me I have 1GB of SDRAM Processor must be the Superior 2GHZ a short while I art
- I play guitar in my pod xt pro reballancant by the sound card
- BUT NOTHING ON IT'S SHIT !!! THE PURE AND SIMPLE SHIT !!! SHIT !!!! FUCKING SHIT !!!

Prepare to then you eat the balls Seriously ... I have to install about 6 to 10 m-audio so that it works even when I ca not redmarre my computer working again everything blows .dropoff window Next level of frquence chantillonage I can not dpassez the 48000Hz apart if I put one option activated ONLY kind between the analogue (so it n 'there is no return through the speakers) then with cubase and the software is not receiving any signal ds I put the map march yet I'm rgler all my peripherals. The worst is that the line input sound does not yet walk in my store or I bought the AC has air market apparently ca dpendrait installing your computer. Oh and I forgot that his walking half the time when he wants to get out of my speakers! LIVE SOUND CARD BASE !!!!!

Well the manual saw it in English Ben is the merdeeeeeee !!!

Résumé: It is useless to have the crazy PC and all the trimmings for a sound card that does not work and that ultimately will fuck you out of you and give you the urge to kill certe sound card m .... of .... enc of ch .... son of p ... m .... voil is the big shit! And I add me well I torcherai ass with.

PS: I'm going to get my money back so much that ca nerv me that this card does not.

Ben listen to get a DJ must use the installation is done properly again when I plug pod xt pro order rgler my rglages the plant via the PC computer because of the card sound.

I use Cubase and it detects no sound (no tape recording in general there is just a horizontal stroke without frquence the curve there ame no tape) the Latency is not famous for a card she Exceeds 20 while with preset Asio I have a much lower latency.

I use about a month and I'm going to make me change my card so that c'tait shit.

THIS IS SHIT !!! THE PURE AND SIMPLE SHIT !!! SHIT !!!! FUCKING SHIT !!!
Last critical AC would that I will put ngative rating this product con but I'm sorry but it threw me out of me a product that does not work in the end I record my pod xt pro and rendering is much better!

DEAD TO THIS SOUND CARD TO CON !!!
Did you find this review helpful?yesno
»

Big Fat Duck's review (This content has been automatically translated from French)" When it works, it's good!"

drivers have never been very stable with me .... In any case, the records have always ended up crashing. (I record my DJ mixes with this audio card with Virtual Dj. I know it is not as terrible software).

Otherwise I had mixed live (by skype ...) with this card and it was pretty well shot.

Installation is pretty good. on the other hand must retain any USB port it was plugged into installing it, it seems it does not accept to be plugged elsewhere without reinstalling!

I do not like the problems that I encountered in recording and the fact that I often have to reboot several times before it works properly.

radiobonheur's review (This content has been automatically translated from French)

No problem with XP in less than 2 minutes it's over. My son (6 years) could have done.

The drivers seem carefree, easy to install and uninstall, and stable. Last day rgulire M Audio site (in French! Is the joy).
I use Raduga broadcast on this map, no multitrack editing.
I regret the lack of rglage PC: the fact of using the USB does not allow the PC to the Audiophile reconnatre as a SCSI: no "console" in the properties rgler s PC audio. Fortunately even when the volume is adjustable on the case ...

My only concern: Buy on the net, the map n'tait not come with the power supply (yes, it takes one!) I have to wait a week for rcuprer the thing. .. The power supply is not Intgr origne packaging, do not forget the rclamer!
I use the Audiophile for ten continuous days (24/24) for the radio broadcast. Everything works perfectly, sound 16 bit / 44100 Hz is perfect: Reading pafaite no default, enchantment perfect MP3. A simple and reliable card that is perfect to use radio.
For 229 Euro I'm surprised such a quality.
Did you find this review helpful?yesno
»
Read the 20 user reviews on the M-Audio Audiophile USB »