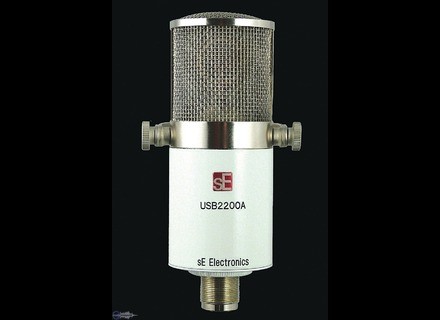 Sold in a cardboard box without carrying case but with a low-quality suspension mount.

I've been using it for one year. It's very convenient for demos. The sound quality is quite good. I use it sometimes to record guitars. The main advantage is that you don't need a mic preamp: just plug and record! Always handy and very convenient for mobile applications (you can take it anywhere with a notebook).

I use it with Cubase and the asio4all driver I downloaded form the web.

The gain setting has to be adjusted in the computer otherwise if the monitoring signal is too loud you get mic bleed. It was a big problem for me because it was impossible to record with a metronome, so I bought a headphone preamp to solve the problem.

I've owned it for over one year. The suspension mount is already broken but it has a 2-year warranty so I'll get a replace from the manufacturer.

One month later: I already have the suspension mount replacement.

It's a quite good mic with a nice proximity effect both to record vocals and guitars. For demanding applications, buy a real vocal mic.

This mic is quite expensive and I think new products with XLR to USB converters are more interesting. It helped me do a lot of recordings but still the price is too high.
Did you find this review helpful?yesno
»

krisis's review (This content has been automatically translated from French)

sE Electronics USB2200a
3
SE2200A typical feature of which is a very good mic multiple use.
However, there is a very interesting usb output since it does not require the use of a preamp.

I have used that usb at the moment and I'm really satisfied with the minutes of the vote.
Indeed, I spent XLR account for better control of the sound.
However, the catch block usb notes are very reliable even if a bit tedious to work to the mix.
UPDATED April 2008: I changed my micro and I also changed the rating of the SE USB 2200A.
This is useful for a micro view taken very rough draft by usb.
XLR (with JOEMEEK threeQ) is very very average (at this price there is no miracle sorry).
For voice in any case I think there are much better for the same price even if there are no miracles in this price range (j'me repeat but it's important).
Artist rapper who wants to record voice -> do not buy this microphone!!