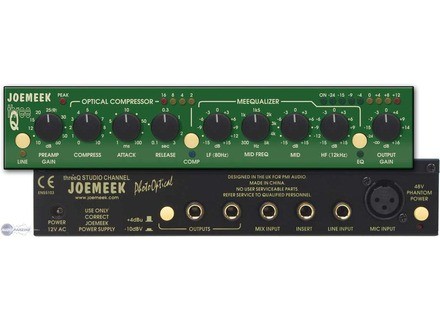 Joemeek ThreeQ
4
While I won this unit in a monthly drawing I assure any reader that my review has been very fair. If anythinggetting it for free keeps the pressure off in that I dont have to justify my purchase. To see me justify a purchase, see my review on esoteric AC power cables.
The threeQ is much cheaper than Uber AC power cables and at a U.S. Retail of $299.00 and..I did not have to listen nearly as hard to see what it had to offer!


The cost of this preamp alone is enough to have people look in the threeQs general direction. But what really gets one to saunter over for a closer look is that this half space pre also has an optical compressor and equalizer built in. Making it not just a preamp, but a full blown channel strip! A channel strip that may be just what the studio On-A-Budget ordered.
I would highly recommend going to the Joe Meek info site and downloading the threeQ manual PDF. It is really worth your time and at the risk of sounding sillyit is truly an enjoyable read. Not like a boring insurance document at all but exhaustive in detail and tidbits.
The stepped gain controls on the Preamp and Output gains are very nice in getting those repeatable level settings. The Optical Comp is very noticeable and a little dab will do ya. Basically you set your Attack/Release and then turn the Compress dial, starting counter clock wise, till you get what youre looking for. The eq (Meequalizer anybody?) has Low Frequency, Mid Frequency/Mid Frequency sweep knob and High Frequency. I have not fiddled with these much as I like to try and eq at the source. Not to mention that if I need to pursue eqing a track than I can do that in the digital realm.
But I think of my nephew, a young budding engineer whos recorder doesnt even have an eq built in. This would be a wonderful tool in situations such as his.
There are three push buttons on the front. One is to go from the Mic Input to the Line Level Input which is a nice convenience. The other two are for the compressor and eq and is really nice to A/B the tweaks to the signal that your working on. These have bright lights under them so that you know your routing situation at a glance.
It also has phantom power (another thing missing in my nephews modest studio) on and off on the back and a 4+/-10 switch for alternating level requirements in the Prosumer universe. Not to mention the ¼ Insert jack for getting any other piece of gear you might have into the real time threeQ loop.
The metering is very bright and set along the top face of the unit for easy monitoring even when below eye level.

The only thing I didt like is the wall wart power adapter. I could live the rest of my life with never having to find a way to deal with these but really...what would a studio be without one or two taking up valuable outlet space. Learning to deal with these power-sucking ticks in our studios has almost become a rite of passage and making peace and room for them is a sign that one truly belongs to the recording universe.

The build is impressivenot cheap. I wouldnt think twice about having it unracked. The knobs have a solid feel and the depress buttons dont feel like they ride atop a cheap spring. With a classy emerald green front it looks as solid as it feels.

In closing I have to say that I compared it to several of my pre-amps including the Focusrite Octopre and the True Systems Precision 8 and all in all it performed rather well. Its always nice to have a few pres to choose from when doing a project but if your looking for just one pre that has a great deal of versatility you would do good to glance at the Joe Meek threeQ. Heck at its price and size I may just go purchase another to stereo my groove!

Joemeek ThreeQ
4
This is a channel strip which contains a preamp, compressor and EQ. Basically it has all you need, and it's made by Joe Meek, who make consistently awesome gear. This is no exception as it contains a wonderful solid-state analog pre-amp. There are XLR connections as well as 1/4" connections, though I only use the XLR for microphones. It's one space on a rack which is great as it saves you some space for more pres or compressors or whatever.

Using this channel strip is really easy overall. It has an input gain knob which is pretty self-explanatory. One thing I noticed about it which was unfortunate was a lack of phantom power as well as phase reverse, so either plug-in that phase and get an external phantom power supply, or look elsewhere!
You can decide whether to engage the compressor and the EQ via two switches, one for each. If you do decide to use them, the compressor has a knob for compression, attack and release so it's got a healthy amount of control over the sound. The EQ is four-band. Overall that makes for a lot of control.

The sound of this pre amp is really good. I couldn't believe it was as cheap as it was when I tried it. Mostly I liked it for the sound of the pre-amp in general, but I really also liked the way the compressor and the EQ worked. Having the low end fixed the way it is would be frustrating if I didn't have consistently good sounds coming out of it. The compressor is not the hardest or the most comprehensive compressor out there but it'll work well for a variety of uses especially if you're working with rappers or other vocalists that you know will need it from the get-go. It's a really transparent channel too with I think everyone can appreciate.

Overall I think this is an incredible bargain really. It's far from the best but for what I do, which isn't always the most professional sounding stuff (sadly), it usually works fine. Definitely worth it for somebody who's looking for a lowbudget addition to their home studio or even a pro-studio, though it probably won't stack up well to what you're working with if you already have great stuff. I'd recommend this to just about anybody as it has that many uses.
Did you find this review helpful?yesno
»

Joemeek ThreeQ
5
The Joe Meek ThreeQ is an analog based, solid state channel strip that contains a preamplifier, an optical compressor and a four band equalizer. It has 1/4 inch connections as well as an XLR input for your microphone. It is powered by the 12 volt power supply that comes with it and it is not a standard rack mountable piece of gear.

The configuration of the Joe Meek ThreeQ is pretty easy to follow all together. From left to right, it has a knob for preamp gain, while the optical compressor has parameters for compress, attack, release and the EQ has a low filter knob that is set on 80 Hz, a mid frequency knob that you can choose your desired frequency with another knob to set the gain, and a high filter knob set at 12 KHz. There is then an output gain knob and buttons to set the compressor and EQ either in or out and another to choose either line or mic input. It also has a series of LED meters that measure a variety of things and come in very handy. The manual for the Joe Meek ThreeQ is pretty complete, but really isn't necessary to learn the unit.

The sound quality of the Joe Meek ThreeQ is really good overall, as I'm a big fan of the preamp as well as the compressor and equalizer. The preamp won't color your sound at all and definitely will reproduce the sound of your microphones well as accurately. The compressor and the EQ are both very clean and respectable sounding. I really can't complain at all about the overall sound of this unit, especially when you take into consideration what you are getting for the price.

I've been using hte Joe Meek ThreeQ for only about a year but I've grown to love this unit in this short time. While its certainly not the best channel strip I've ever heard, it is respectable across the board and is always reliable for me. Its basic form makes it easy to use and the price really can't be beat. You're getting a nice preamp in addition to a clean compressor and EQ all for a one low price. If you are a home studio owner looking to expand your set up with some nice channel strips, picking up a few of these is definitely a good start!
Did you find this review helpful?yesno
»

stega's review (This content has been automatically translated from French)

Joemeek ThreeQ
5
It is a preamp with a compressor and an equalizer. Quite full for the price (between 200 and 300 euros, it depends where you buy it!)
Missing as usual in this product range a button on / off, unfortunately. For the rest it is really complete. And gives a clear impression of solidity, quality manufacturing. The knobs are really nice. Finally there is serious.

The config of this device is very simple, you just get used to the compression part. There's just one knob "compression", no ratio and threehold separate. However when you are a beginner, it's actually quite practical. So for me it is really perfect.
And the great equalizer is seen.
As against the manual is in English, and very short.

Ah this is excellent. The preamp is right, it has enough headroom. compression is nice, it gives some color to the sound. Then the equalizer ... frankly it is great, very musical.

I have a few days, I use my voice and acoustic guitars, acoustic in. I was so far the preamp which I had not really satisfied: a tube pre, a audiobuddy, too limited, and then a Focusrite voicechannel (good but not versatile enough). It is not easy to find something good, with character, but that does not damage the sound in a price range up to 200 euros. Joemeek with this, I found what I wanted. Of course there are better, but much more expensive. THE RAPORT money is excellent. Of course I would do this choice!
Did you find this review helpful?yesno
»
Read the 16 user reviews on the Joemeek ThreeQ »