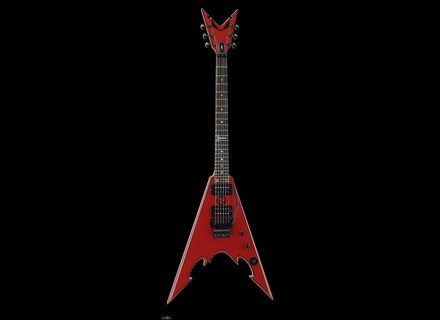 Dean Guitars CBV Corey Beaulieu Signature
3
For about 5 minutes Trivium switched from their Gibsons and Jacksons and started playing Dean guitars. This is Coreys Dean model which he played for about a week. It is like a metaled up flying V. He is known for playing Jackson King V's so I guess this is as close Dean could get for him. The guitar has a mahogany body with a mahogany. The guitar has a rosewood fretboard with the Trivium logo on the 12th fret. The body has some cut outs in it to make it more metal. Up top there is a locking nut and the bridge is a Floyd Rose copy. Originally these came with some Corey signature pickups but these are now long gone and in this example are a set of Seymour Duncan Blackouts which is what Corey currently uses in his Jackson.

The guitar feels a lot like a Jackson. I am starting to see a pattern here. The design is pretty easy to play. The body shape means there is nothing blocking your access to the upper frets. I do not like the cut outs on the body. If you generally play in the classical position like I do the cutouts in the body make it a bit uncomfortable. The Floyd Rose copy isnt great. If you hammer on it a lot it will go out of tune. I dont like how the controls are laid out. I think the volume knob should be closer to the bridge pickup so volume swells are easier. With the pickup selector being the closest you might find yourself accidentally switching pickups.

I do not know how the stock pickups in this guitar performed. They were probably copies of whatever Corey used in his old Jacksons. Dean tends to copy an artists preferred pickup instead of just using it in their signature guitar. The pickups in the guitar when I played it were a set of Seymour Duncan Blackouts. These are what Corey uses currently. The Blackouts are like the alternative to EMG's. They are good in places were the EMGS's are not. The Blackouts have a tighter low end than EMG's and they dont have as much top end fizz to them. They are good if you dial a lot of low end into your sound and want it super tight without losing all of it.

This guitar is only for the hardcore Trivium fans. The fact that the guys in Trivium didnt even play it for ever long should say something. They went from Gibson and Jackson to dean then back to Gibson and Jackson in about a year. After they switched from Dean they said they had a lot of problems with the guitars they got and they are artists. You would think they would only get the best of the best but I guess they didnt. That should tell you something about these guitars.
Did you find this review helpful?yesno
»