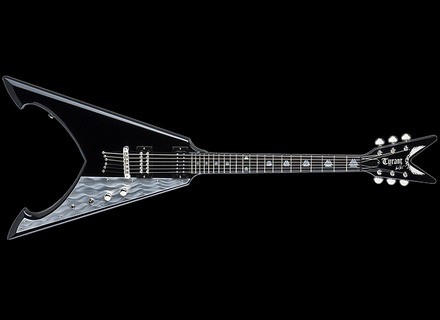 Dean Guitars USA Michael Amott Tyrant
3
This is Mike Amotts new signature Dean guitsrs. For years Amott played Custom ESP V's and then he got his own signature model, but he was part of the exodus of guys to Dean. Currently he is still playing these guitars but I dont know how well they have been selling. This guitar has a pretty standard V feel. It is just different enough to be a Dean. You get a mahogany body in the V shape. The neck is mahogany as well with set neck construction. The tuners up top are non locking Grovers. The bridge is a standard non locking tune-o-matic. The fretboard is ebony with 22 frets. The pickups are Deans own DMT pickups. I will get to those later but they are pretty blatent copies of Seymour Duncans. Dean has been copying guys preferred pickups for their signature models instead of just putting in their preferred pickups. I think this is a pretty silly trend. The controls are uber simple with a volume and tone with a 3 way toggle.

The V shape usually lends itself to good upper fret access and this is no exception. The shape of this guitar means there is very little body around the neck so you can pretty much reach every fret without obstruction. The inlays on this guitar are pretty cool. They are a triple A design that looks pretty cool. With cool inlays like this you can really admire the fit and finish. The inlay work on a guitar is one of the first places I look when I am checking out if a guitar is built well or not. The beveled edge on the body is a small feature but makes a big difference in comfort. A normal v with a sharp 90 degree edge can dig into your arm after a while and feel uncomfortable. This guitar has a beveled edge so the edge will be parallel to your arm so it wont be digging in anywhere.

This guitar has a set of DMT pickups. DMT which stands for Dean Magnetic Technologies is their line of pickups. And they are a throwback to the 70s with the ways they are ripping off other companies stuff. For many of their signature guitars now instead of putting in whatever pickup the artist really uses they have been copying the pickup and calling it their own custom design. For years and with every other guitar company he played with Michael Amott used a Seymour Duncan JB in the bridge of his guitars. Now with Dean guitars and in a move that most other Dean endorsees are making he has switched over to in house Dean pickups. With Michael Amotts signature guitar their pickup of choice is the Tyrant. It is pretty obvious what pickup this is modeled closely after. This is a pretty high output pickup. It is rated at 16.2k which is pretty hot but not over the top compared to other modern pickups. The JB he used for years is rated at 16.4k so you can see things have not changed much. This pickup is made for heavy metal brutality and melting faces. The pickup features overwound coils and large cap screws that tell everyone that this pickup is made for metal. These cap screws are also very noisy when a string comes in contact with them so that can be a problem. The pickup has a pretty sharp sound but it isnt as brutal as its exterior might make you think. Because its based on the JB it still has some old school tone with it. The neck pickup is a standard Dean pickup so I dont have as much to say about it. It has a smoother sound. It is pretty much your generic hot rodded PAF copy that just about everyone makes. It gets you a smooth bluesy sound. Throw on some wah and you have Amotts lead tone, as easy as that. Blatant copies aside the guitar sounds pretty good.

This guitar is pretty good. I must admit I liked his old ESP guitars better and not his ESP signature. Before his ESP signature he played some Edwards style 67 Flying V copies. I thought those guitars were really cool and wished they had made the signature a more traditional design. If you are a Dean and an Amott fan this guitar is perfect for you. If you are just an Amott fan maybe getting an older ESP model would be better.
Did you find this review helpful?yesno
»