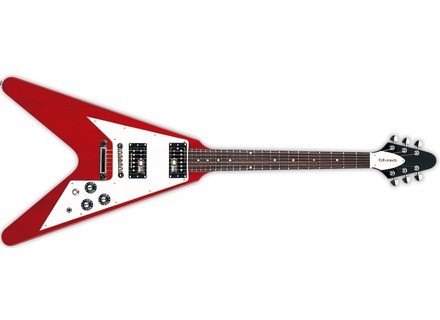 Edwards E-FV-85D
5
Edwards is a small off shoot of ESP that makes very familiar looking guitars. Edwards is a sub division of ESP kinda similar to LTD but their guitars are in between the quality of a full blown ESP and an LTD. They are also a Japan only company officially so they can make pretty much identical copies of Gibsons without getting in trouble. People recently have begun importing these guitars to America because the quality on them is so good and the prices for them are so reasonable. This guitar is based on a late 70s Gibson Flying V with the more rounded and body colored headstock. The neck is 22 frets with a rosewood fretboard. The neck is bound which is something you do not get on the Gibson Faded models. It has the cool block inlays which you do not see much on flying V's anymore. It has two volume knobs and one tone knob and a 3 way pickup selector. The pickups in this guitar are a set that Edwards puts in many of its guitars. It has Seymour Duncan SH1 Jazz in the neck and a SH4 JB in the bridge.

Being such a close facsimile of a Gibson Flying V it has all the good things and the bad things that a Gibson has when it comes to playability. Because of the V design the upper frets are easier to reach than on a Les Paul. The set neck design means there is a bit of a heel at the neck joint but on this model it is not bad. Because of the shape you may have to play in a classical position when you play sitting down but this is not a problem for me because I always play in a classical position. The neck size on Edwards guitars are pretty interesting. The neck size is pretty much exactly inbetween a big 50s Gibson neck and the thing 60s Gibson neck. Edwards says its not too thick or not too thin.

ESP and Edwards know how to really finish off a guitar. With a guitar this good on the surface they could easily throw in a set of garbage 2 dollar pickups and most people would still buy it and put in their own. But with Edwards they give you great aftermarket pickups from stock. The pickups in this guitar are better than what you would have gotten in the comparable Gibson. The 59 has a great PAF style tone. It has a good amount of sag and the mids are nice and pronounced. The JB in the bridge is the jack of all traits and can be used for just about anything. You can get great overdriven tones all the way to searing high gain with it. This combination is not just for classic rock either. Many Jackson guitars come with this combination so that should tell you that this combination is very versatile for every genre of music even metal.

This more and more of these Edwards guitars making the trip overseas to America more people will be able to learn of the great quality Edwards is putting out. You no longer have to search for a 30 year old guitar when you want a late 70s Flying V or pay 4000 dollars when you want a Les Paul Custom. If you can ignore the name on the headstock you are pretty much getting the same guitar WITH upgrades. They are made of the same wood and are the same shape but come with Seymour Duncans stock and usually for at least half the price. If you pick up an Edwards like this you cant go wrong.