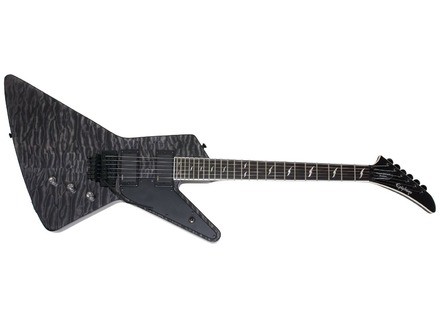 Epiphone Prophecy Futura FX
5
The Gibson Futura was an early version of what later became the Explorer. In the late 50s Gibson was trying to show that they were a modern and futuristic guitar company so they put out several new model with radical shapes. Many of these guitars caught on the like Flying V and Explorer while others like the Futura and Moderne faded away. Epiphone is bringing the Futura back in its Prophecy line of metal guitars. The Prophecy line has a few guitars of different shapes but they all pretty much have the same basic features.The Epiphone Prophecy series is a really nice line of guitars from Epiphone. These guitars have a real metal attitude to them. All the guitars in the Prophecy series feature 24 fret ebony fretboards on special satin finished necks with EMG or super hot passive pickups. The necks are nicely bound like on custom models They all have cool quilt maple tops and special inlays. The Futura is pretty simple with the controls there is a master volume and master tone knob with a 3 way switch. To finish the guitar off it is equipped with a Floyd Rose bridge.

The Futuras radical shape has its advantages. The cutaway allows for great access to the upper frets. The access is better than what you get with the 24 fret Les Paul Prophecy model. The speed taper neck is a good alternative to a raw neck like you would get on an Ibanez or Zakk Wylde Signature guitar. The satin finish on the back of the neck means the neck is faster to play. The finish on the back of a neck can cause the neck to become sticky when you are playing and cause you to snag on the neck. The ebony fretboard and 24 jumbo frets let you get a good action on the strings. The Floyd Rose has a locking nut so once it is setup you can wail on it and it will stay in tune.

The huge Futura body means you get a lot of resonance in your tone. And this resonance with the EMG pickups mean this guitar and really sing. The 81 in the bridge and 85 in the neck mean that you have an iconic time tested metal pickup set that can handle all the heaviness you can throw at it. The 81 in the bridge gives you the high end crunch and distortion that gives it clarity no matter how much gain you are using or how low you tune. The 85 in the neck is a great pickup too. Since the neck pickup is pushed farther back it will get more bite than a normal neck pickup. It has a more fuller sound than the 81 so in the neck position you can get fat lead tones. The 85 is also good too in the bridge. With EMG's quick connect system you can easily swap these pickups position without soldering anything. The 85 in the bridge produces a super thick tone and cleans up better than the 81. Speaking of cleans if you do the 18v mod on the EMG's. With the 18v mod you run the pickups on two batteries instead of one. This provides a more organic tone with more headroom. This tone produces better cleans than stock EMG's and clean tones are usually the weakest part of the EMG sound. This guitar comes with a battery compartment so you may have to mod another one in if you do the 18v mod.

The Futura is a cool alternative to the traditional Explorer shape. Since the Futura came first you can say that the Explorer is an alternative to the Futura. Putting out the Futura again is a way for Gibson and Epiphone to put out a more metal version of the Explorer without really changing the Explorer since the Futura was its own design. And they are not putting out an Explorer with a Floyd Rose any time soon. The Prophecy line of Epiphone guitar is a great idea and it is doing well for them. If you are looking for a metal guitar and dont mind it being a radical shape the Epiphone Futura is a good option.