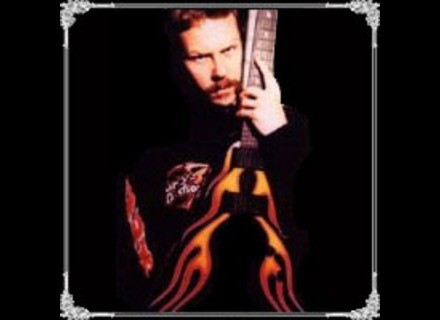 ESP JH-1
4
This is the guitar Hetfield played in the Whiskey in the Jar video. It is one of the earliest Hetfield signature guitars from ESP. You do not see these much and the production was very limited. It was a pretty basic guitar as well. It is a Flying V design with a mahogany body. It has a bolt on maple neck with a 22 fret rosewood fretboard. I found it odd that they made it a bolt on instead of a set neck or neck through. The headstock has a spear head shape which is pretty cool. The electronics are typical Hetfield with a set of active EMG pickups. It has an 81 in the bridge and a 60 in the neck. The controls are simple too with just a master volume and master tone control. The pickups are switched with a 3 way toggle. What really makes this guitar standout is the cool hot rod flames paintjob.

Its pretty weird that ESP made this and the KH-1 bolt on necks. The guitars Metallica were playing at the time were not bolt on's so I guess they were being cheap with their first signature models. The guitar has jumbo frets on the rosewood fretboard so you can get a nice easy action. It has locking tuners up top which help you stay in tune. The bolt on neck joint is pretty smooth for a bolt on but it still gets in the way a bit. Even with the bolt on construction they finished the back of the neck so it is a bit sticky like the body. Its like they were trying to hide the fact that it is a bolt on. The guitar neck also does not have any binding. This tends to lead to sharp fret ends if the guitar changes temperatures a lot.

Hetfield is a pretty traditional guy. I guess ESP didnt know what he wanted at this point because this is the only Hetfield signature guitar to come with Kirks pickup setup. Its like they made the JH-1 and KH-1 both for Kirk but just put some flames on one and gave it to James. It has dual EMG 81 pickups which is what Kirk uses. I am not a big fan of this setup, well I am not a fan of half of this setup. The 81 in the bridge is very traditional and great. It has a nice top end grind that makes your riffs crazy tight. It has a great distortion sound too as you would expect. In the neck position it is too bright and trebly to be a good neck pickup for me. I like smooth neck pickups. The 81 is not very smooth at all. In the neck I would prefer a 60 or an 85. Every other Hetfield model has a 60 in the neck. This is the only one without it. I guess James learned from his mistake.

These guitars are pretty much collectors items now. I can see why Hetfield doesnt play them anymore. They are not that good guitar wise. They may be a good investment for someone or wall hanger but to play out and gig I wouldnt recommend it. The pickup choice is odd and the bold on neck is just cheap on a guitar of this caliber. If you want to look like Hetfield for your Metallica tribute band get an Explorer.
Did you find this review helpful?yesno
»