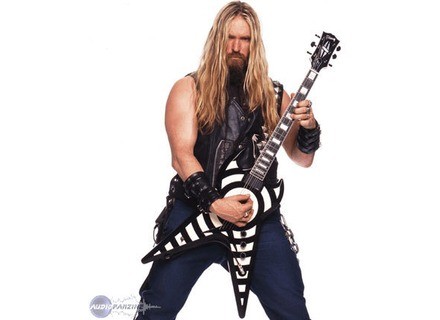 Gibson Zakk Wylde ZV
1
For a short time I looked like Zakk Wylde was going to switch to Dean guitars. This was back when Dean was courting all sorts of players from around the scene. They had a Zakk Wylde Razorback coming out and a guitar that looked a lot like this guitar. The Dean version of this guitar had exactly the same shape except with a Dean split V headstock. I guess Gibson wasnt going to have any of this so they got him back and made their own version of this crazy thing. This is what you see here the Gibson ZV. The shape is an ugly mix of an SG and a Flying V with a Les Paul Custom neck and headstock. The guitar has a solid mahogany body with set neck construction. The neck is raw maple with an ebony fretboard. The fretboard has jumbo frets. Up top you get a Les Paul Custom headstock with standard Grover Tuners. Down at the bottom is a tune-o-matic with a 58 Flying V style string through stop tail piece. The pickups are standard Zakk Wylde with the Zakk Wylde EMG set.

For being so ugly the guitar plays alright. The neck isnt too beefy. It has a bit of a D shape to it. Zakk Wylde guitars all have raw maple necks which play really nice. Since they have no gloss finish on them they do not get sticky. The ebony fretboard feels good under your fingers and the jumbo frets are nice and slick for leads. The big Les Paul Custom inlays are impossible to miss. The guitar is thin like an SG so it is not heavy at all. It feels more like a Flying V than an SG. Like all the other Zakk Wylde models there is no separate compartment for the battery for the EMG's. I find it strange that they do not include them on the Zakk Wylde models but all the Gibson Gothic II guitars had them. It makes it much easier to change batterys. With this guitar you have to open up the whole guitar to change the battery. The pickup selector is also on the upper V bout for some reason this is really a bad place to put it. You really have to look for it. Even the Dean version had a better place for the pickup selector.

With the EMG pickups you get the traditional EMG sound you hear with every other guitar. The Zakk Wylde EMG set isnt anything special. It is just named after him because he has been using them the longest. It is just a standard set with an 81 in the bridge and an 85 in the neck. You see this set in a ton of guitars and for good reason. The set sounds great for metal and heavy music. The 81 in the bridge is great for heavy riffs and low tunings. It has a nice high end gain sound so it doesnt get muddy. It is razor sharp in its voicing but has nice low end so it sounds sound thin at all. The 85 in the neck is a lot smoother than the 81. It has a bit more low end and a smoothed out high end so when you are playing leads they come out nice and smooth instead of harsh.

If you want a Zakk Wylde guitar get a Zakk Wylde guitar. This guitar is just a silly cash grab. If Zakk likes this guitar build one for him and be done with it. There is really no reason for them to come out with a model like this. Especially since it wasnt even their design. The only people who would really like this model are hardcore Zakk Wylde and Dimebag fans. This guitar is like a mix of both their designs but their designs are so opposite there is no point in mixing it.
Did you find this review helpful?yesno
»