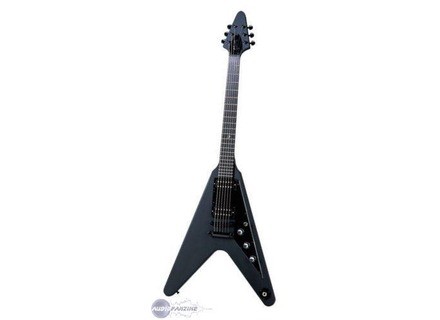 Gibson Gothic Flying V
3
This is one of the earlier Gibson Gothic models. This was back when Gibson thought painting a guitar black automatically made it good for metal. Later gothic models came with active pickups including for a short while EMG's. While these earlier models are good they are not as good for metal as the later ones. This model is actually based on a pretty rare Flying V made in 1998 that blended the body of the 67 reissue with the control layout of the 58 Flying V. The guitar is made from solid mahogany with a mahogany set neck. The neck is 22 frets with a ebony fretboard. The neck is not bound. The fretboard is clean of all inlays except for a circle thing on the 12th fret. It has two volume knobs and one tone knob and a 3 way pickup selector. It has 496R and 500T ceramic magnet pickups in the neck and bridge respectively. These pickups are Gibsons own design. It has a traditional Les Paul style tune-o-matic bridge and stop tailpiece.

Being based on the 98 limited edition there are small differences. The main difference with the 1998 limited edition Flying V is the way the knobs are arranged. This guitar has the knobs arranged 3 in a row. I like this setup better than the newer one because on the 60s Flying V's the knobs are in a triangle shape and they can seem a little bunched together. Because of the V design the upper frets are easier to reach than on a Les Paul. The set neck design means there is a bit of a heel at the neck joint but on this model it is not bad. Because of the shape you may have to play in a classical position when you play sitting down.

The pickups the V comes with are generic Gibson pickups. They are good at everything but not great at anything. The mahogany wood give the guitar a really deep sound even though the body is not that big. If you want to play heavier music you may want to change out the pickups. The Gibson pickups are medium output and are voiced more for classic rock. The 496R is voiced for the neck and some people say it is a little bright. If its in the neck position in the right guitar it will balance out the neck position sound perfectly. Its sound is pretty smooth albiet bright. The brightness helps balance out the neck position tone which can give you good clarity in the neck position. With a guitar with a metal Image like this you really want to swap in some metal pickups. A set of EMG's would sound and look perfect in this guitar.

These guitars might become collectors items in the future but I doubt it. I guess when they made the 98 limited edition V they made too many to be able to price them as limited guitars like they wanted to so they threw some black paint on some and started another model. If you are looking for a Gibson flying V to play metal on this is a pretty good choice, just remember that the sound isnt as heavy as the looks so you may need a pickup swap.
Did you find this review helpful?yesno
»

Being a V shape means the is unlimited access to all frets, lead playing access is easy! There is a nice variety of sounds available from the two humbuckers and 3-way pick up switch and it is easy to get a nice array of tones.
The guitar has a nice balance, but it would want to be neck heavy and dive at times. The neck has a favorable thickness - not too slim and not too thick.
I absolutely loved playing this guitar while standing live during shows and at practice. It is a bit different if you want to sit and play it though. You need to drop a horn between your legs while sitting - so for that I'll drop the rationg to a 7.

I used this guitar with custom built Peters amplifiers, which are kind of a cross between a Peavey 5150 and high gain Marshall/VHT with a little Boogie thrown in. The amp was paired with an Avatar 4x12 that had Celestion G12h -30's and a Splawn 4x12 with Governor/ManOWar speaker combo.

I usually go for a nice thick Jerry Cantrell AIC tone, to use with my modern rock/metal band. this guitar can get you any heavy tone you want and pretty good cleans. Suits my style of music nicely.

This guitar is super thick and super chunky! It does get close to being just a tad bassy under high gain- but overall this is a great heavy tone machine!

The guitar had very nice and thick lead tones and nice tight rhythm tones that cut through well.
My least favorite sound was cleans, but they were not too bad when the neck pickup was engaged.

I loved just about everything concerning this guitar - so much so I bought another one!
I bought this on closeout from an online retailer and got a great price on it and bought my second one as a NOS at an even better price, when no one really knew about these.
I would buy this again if under the same circumstances.
My least favorite things are the sitting and playing issue and the so-so cleans, but I still loved it.

I have owned many guitars and had a number of years where I would buy, try and flip, which enabled me to have many guitars around to try out.
This V has ranked right up there with the best of them in overall satisfaction.
For what I bought them for originally - they were a complete steal! Then for awhile the used prices began to go up - I am not sure how they are priced these days.

In the end, I did end up selling my two Gothic V's. I was getting into my 30's and it started to seem a little strange for me to be playing out with them. Plus I made money on the sales!!
Did you find this review helpful?yesno
»

LeMikou's review (This content has been automatically translated from French)

Gibson Gothic Flying V
5
It's a flying V guitar shaped with the handle any al matte black with all the spices mtalliques black (super fine!) And two double gibson pickups. 22 boxes and no points on the key but just a nice little drawing laz 12th box.

The handle is a little big but great. Good Access in acute since the form does not have horns. get used to play sitting but it's easier when the same with randy roads becaufe the bottom edge is larger and can be caught between the legs. Easy to use (to change the microphone selector and buttons for volume and sound "tone").

I love this kind of guitar. I saw WASP montpellier to me in May and had the same guitar with epiphone in EMG and I found gnial. Then when I got my money I tried the same but because Gibson is better. I found a Marseille I bought it, I did put giuitare EMG and this is fantastic for metal.

I use the mesa or marshals. it is a guitar that is best for sounds gniale sat more than a crunch but it is perfect.
It's a bit expensive but in the style it should not be a lot better and then a flying V aa year look crazy and made srieux (Scorpions, Metallica ...).
Super scratching of metal!
Did you find this review helpful?yesno
»

dave-94's review (This content has been automatically translated from French)

Gibson Gothic Flying V
5
I have mine for a year or so, is one of the top ten models, so AAAAA wood, and it feels compared to those after.

22 frets, neck Gibsonian well in mind, everything is top notch on this guitar, and I let the original pickups that fart fire god. The knobs are highly effective. I play in drop C, and everything is eaten by the microphones, everything is precise, clean sound is a pure joy, and saturation, bah ca claw hands of her mother.

The handle is really great for a used Gibson as I am, everything flows, everything is moving.

Pffff the killing of the ball. It vriament deadly, the pickups are really good, but must admit that with the wood AAAAA, it's going to immediately play on and sustains everything.

It's been a year since I use it, the look is terrible, it's been anything serious.
I bcp guitar, and aside from the PRS, there is little that has come all the same ankle.
But then a € 2,000 at the end, it's normal ^ ^.
The value for money is excellent, AAAAA States, micro crazy, kills brief ca.

I want to say that the odds are very few realistic all the same month I will put mine was € 1800 if I had to part with it.
The first ten produced, there are only three in France.
Did you find this review helpful?yesno
»