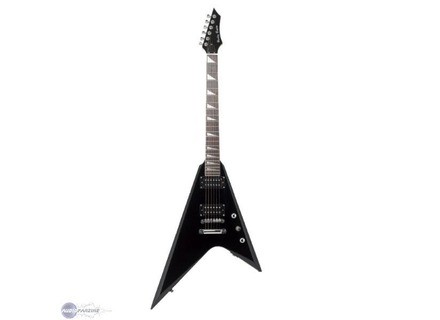 Shuya's review (This content has been automatically translated from French)

Harley Benton R-10
5
- Parts manufactured in factories in Asia BC RICH, Guitar fully assembled and part is built in Germany. (From Thomann)
- It has 22 frets, 2 humbuckers SHADOW He2.

- The round is as said above, Large, rounded on the back, fast, comfortable satin finish, which turned green not like the BC Rich Platinum. basically a flat handle and large type c U. It's a good point!
It is maple, and rosewood fingerboard. So a sound, warm and soft with sustain. It is screwed to the basswood body (brilliant, warm and nice sustain)
- Access to treble is very easy because the shape allows the heel of the neck and body is very clean, no annoying for speed, a little bulky, but a period of adaptation is required poru form.
- The weight is very small, because the shape and wood used are light.
Given the form, it makes sense that this is not an example of balance, it pitches down, but good with a leather strap Bonen, is set.

- The sound is almost plug-n-play if it is already set. It comes almost as adjusted, for some, or none at all, for another. But A Short Walk in the Luthier and it sounds (with ropes or style Ernie Ball GHS). Microphones Shadow, There are few parasites, the microphones do not saturate, they are very powerful, I'm happy for the price is right ...

But everything is relative to the price, without either having a filthy shit.

- I play blues, metal, Death, heavy, black and rock the Texas ...
- I play on a Marshall Valvestate 8100 and a small combo Laney. The Marshall will be replaced by a Valbee Ibanez Peavey 5150 and a Marshall baflle ...
It sounds great on it.
- Sound is very clear on the Crystalline pickup and fat on the neck pickup in poisiton intermediate fairly full, a great sustain.

IN saturated guitar at a very beautiful grain, very close to the Jackson JS.
It sounds good.
The sustain is long is large enough to handle screwed.
The sound of "marriage" Maple / Rosewood and Linden, the rendering is really nice.

I think he put an EMG KIT. Because even if the microphones for the price is not bad, the EMG are much better.

- I Usage requirements for the past 6 months. in parallel with a Fender Stratocaster Highway One, an ESP EX ... etc
- I like the look, sound it, sustain, its handle, its very competitive price ...

- A small lack of heat in the treble and midrange but the bass is very present and correct a little the gap.

- I tried 5 or 6 guitars before. I cherhcé a guitar look quite original and not too expensive without neglecting the overall quality of instrumnet, I found it a good base, but I think I'll mounted microphones like Seymour Duncan SH4, even voi of EMG active (even if the heat is not the easiest task of EMG active, but have a good left her hard to have much in depth).

- The value for money is good vriament when I saw the price, I say, "This is a copy of stagg" and I was wrong, unlike Stagg firewood, it has a real soul. For biloute is a very good basis.
Just a small adjustment in the Luthier and a pack of strings and it's ready.

I let my MSN, if people would ask me questions above: hammer59@hotmail.fr
Did you find this review helpful?yesno
»