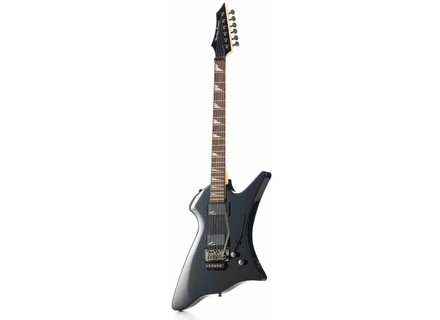 Meuh_gné's review (This content has been automatically translated from French)

Harley Benton HB XXK
5
So c'te ch'tite creature has been born within the confines of Asia legendary and mythical, wholesale, China (unless I am mistaken about the meaning of "made in china" ...)
It is aa 22 frets our disposal (which could be a negative point about this kind of scratching), two houmbouckeurs "designed by EMG", a FR tremolo, a button and a tone volioume, microphones and a three-position selector.

If the handle is pleasant? There is no better! Four times thinner than a ibanez basic, a bit thinner than a Warlock, (basically it's the stick and after you got yourself a Dimebag Darrell ... Yupi)

Good access to the treble is great, nothing to reproach them.

So LA ca fishing. Weight. 're Talking about. If. A horror. Never have you seen a skyscraper that wants to lick you all the foot with the head. Play standing up is an ordeal, it looks horribly. In addition, the little thing to attach your strap is almost horizontal! The strap will pick up all the time! Well I managed myself, I wedged a small ring around the tip of the strap. But the history of weight, I do not know how I will do ... p'tet than trying to "adhesiva" my belt with a kind of scratch ... why not.

Question everything's clean. But after we talk.

Really least 3 for the history of weight and strap locks.

Well then I'll not talk like all the "shredders-nik-sa-mama-i-play-better-than-Jeff Hanneman" that will tell you about their impressions of the scratch after changing the pickups, the neck , the strings, the tremolo ... basically, those who will tell you about the "harley benton version jackson jackson at the same price as a". I will talk about the scrapes that I received it a week ago for the modest sum of 150 euros, with its basic attributes ...

So good recess is not with this guitar you will accompany Lorie Bercy in a year. So I rang the Trash, Black, Death, ... well I'm her the buggers it the merit of being.

Once received, I grant (a grant has creme, not like the dung of Ibanez RG370DX and "Edge Pro 2" as a tremolo)
I and the branch. Paf. Its clear? Lens and clamp on the neck pickup, round, but fine, soft on the mid selector, and heavy, fatty, and not just on the end of the bridge pickup. Surprise, not bad just knew.
Now I'm peter the disto (greasy, very heavy, although bovine) and ... WONDER! Unlike the first Harley Benton I bought (an SG) is a long time, and had a sound it can no longer chemical, it is worthy of a BC Rich platinum. Really. Made great bass, treble res enjoyable ... Great.

When the Floyd ... ben and the skeptics that I see writing in other reviews for this brand "Licensed Floyd Rose Tremolo (one wonders if it is one ...) go to cook an egg on the defenses of a mammoth Argentina. It is a Floyd Rose, has lived up to its reputation! Need I say more.

What? Another box? Oh no the ca me soule. Jai said it all.

This guitar is a gem for Radin, perfect for the guitar that has no money and wants to get an idea very close to what it is like to play on a Jackson 700 euros ...

SONC and go have a look at the site of my group would like for that matter ... if you like black, you will to love, Because we are awesome and grand in this musical!

http://taliesinceltic.online.fr
Did you find this review helpful?yesno
»