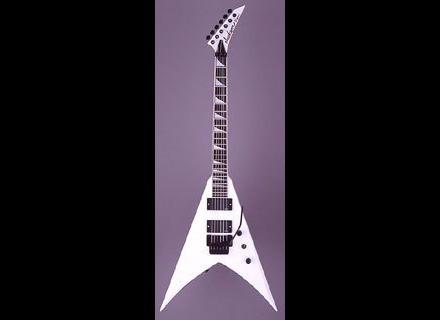 ræf's review (This content has been automatically translated from French)

Big surprise the handle is much larger and round on a U.S. KV2 profile that closely resembles my ESP V Standard,
Then the controls in less than a volume from a U.S. KV2
A black binding on the neck and head, would have been more class because their translucent white there is a little ugly ...
For the rest of the finish could have been a little better, it is below that my ESP standarts.
For a scraper mounted original EMG, they could have put a battery cover.
And below as my RR2 (which is a US) ebony button on the KV2je is far behind that of RR2.
But this is largely a good guitar, and it does not forget that scaffold is to be its price far lower than that of a U.S. jackson.

Good saw the look is so clearly granted in metal B to me.
Channel pleasant, despite its rather large and round profile, access to acute be improved but it remains largely playable boxes to 22/23.
Schaller vibrato being equal to one ORF, so no worries to side.
The guitar is comfortable to play standing up as sitting, is lightweight and does not sting the nose, it's pretty good so massive blunder on the wall or the remains of the group, I says that for the guitar, it's a metalheads Solid ...
Wais it sounds. Thank goodness for the price ...

Fat saturation, accurate, very right (comparable to the RR 2)
In such a lead is it's still right and accurate.
To clean, it's still honorable, even if it's not a skyscraper in mahogany with a G60.

Its not going to do a few days I have already but I am very satisfied.
It's a good scratch, even if it's not the deal of the century.
Nivau the USA is less than one, but it is a good choice.
And then just to cover the kitchissisme in "leather" in the form of scratches, it vaud purchase ... : Mrgreen:
Did you find this review helpful?yesno
»