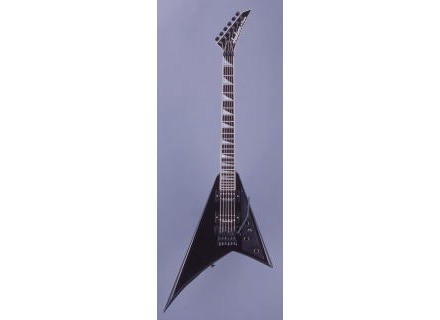 Jackson Stars Rhoads RR-j1
5
Jackson Stars guitars are pretty rare. The quality on them is equal to that of the USA built Jacksons except they are built in Japan and have slightly different specs. For the longest time the only way to get a 24 fret Randy Rhodes Jackson was to get one of these from Japan. The guitar has a neck through body with a maple neck. The neck has a 24 fret ebony fretboard with Jacksons signature shark fin inlays. The neck and headstock are fully bound. It has a Floyd Rose double locking tremolo which is something the original didnt have. It has two Seymour Duncan humbuckers. It has an SH2 in the neck and a TB4 in the bridge with one volume and two tone knobs with a 3 way switch. It is also available with EMG's and an old school Khaler tremolo.

The frets arent as easy to reach on this guitar as on other Jacksons because the shape of the V. The upper fret access on the 22 fret versions are hard to reach and this guitar has 24 frets. The ebony fretboard feels good under your fingers. The neck through design means there is no heel so that is good too. Jacksons at these levels come with compound radius necks. This means that on the higher frets the radius is flatter making it easy to bend but on the low frets its more curved making chords more comfortable.

With the Seymour Duncan pickups the guitar has a huge versatile sound. The alder body with the maple neck give you the classic shred guitar tone. Not many companies put after market pickups in their guitars but Jackson does. Jackson knows if you are paying more than 1000 dollars for a guitar you should not have to change the pickups right after you get it. With the 24 fret neck the neck pickup is slightly farther back than on the normal RR1 so the neck pickup tone is slightly different. The neck pickup is a bit brighter than on a normal RR1.

Randy Rhodes was one of the most influential guitar players of the last half century. This model of Jackson guitar is a lasting tribute to his legacy. With Jacksons falling out of favor in use among the guitar players of popular music you do not see guitars like these being played as often as you would a few years ago. With the Japanese factory building high quality Jacksons also it is easier for people outside of America to get the high quality models. This is sad because its a perfectly fine and versatile guitar.
Did you find this review helpful?yesno
»