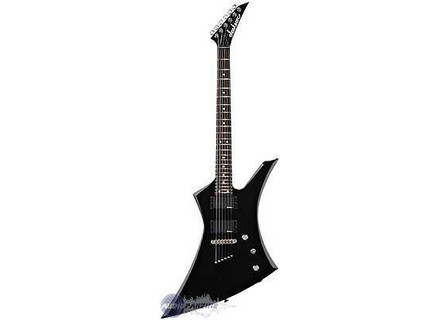 Eternal Kelly's review (This content has been automatically translated from French)

Jackson JS30KE Kelly
4
It was manufactured in India.
It has 24 frettes.Deux Jackson CVR Humbuckers in bridge and neck.
For the bridge is a fixed string with the through, so a good sustain.
Level knobs were the classics: one volume, one tone and one 3-position selector.
To handle Jackson is a very fine, very flat and fast.

The neck is super nice, or at least me it is fine with me.
Access to treble is not too bad thanks to the handle end.

Good on the other hand for ergonomics, this is the problem of the guitar, the shape is really beautiful, but (because there is a BUT) the balance is disturbed, the guitar looks great to the head, so you need a good strap and get used to but at first I had trouble.
To shape it also has some difficulty in finding a good bag or case, I just ordered one from Thomann I will update once I know what it's worth.
Worse Jackson with special forms to be careful with pointed ends and get used to having a point which exceeds the back for not hitting against a wall.
But it's good for the price TFW an extraordinary guitar.
It will sit.

5 because of the imbalance

It's a Jackson so that's usually the big rock and metal.
Instead, I play metal.
I play a Peavy Rage home is not too bad in power chords, a good sustain, good sitting in the grave. The solos go great but the mediums are a little weird, I'll change the string tie, I think it is just be there.
I have been playing around with a multi-effects Zoom G2.1U in distortion as it sounds super clean.
So for the distortion is good especially for solos that sound really good with the sustain of this skyscraper.
To clean, but it is no more, if you want to play classical or jazz take something else.

I've had three months and I am satisfied. Jackson fan, I fell in love with the form, not having the budget for a KE3 I chose this one, I will can be a bridge when I EMG81 in some money. Having a Jackson I trusted the brand in the commander at the store without trying it, I was not disappointed except by pulling the original (9-42), 10-46 might have been more favorable, so I have to settle for installing the game 10-46.

Good quality / price ratio
Provide a good strap.
I would definitely do it again this election.
Did you find this review helpful?yesno
»