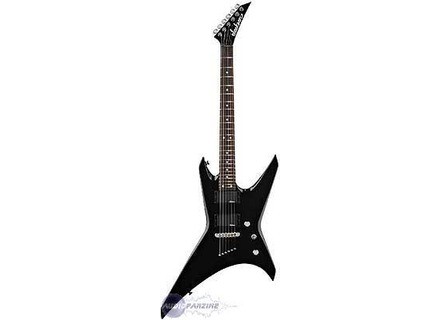 this is how it sounds

I got it with hard case! Not bad, for the price

+
the shape is very comfortable!! Mainly in sitting position, better than any guitar!
Neck is perfect for me, with scarf joint, of course
Very good tuners! (jackson)
High output jackson PU-s
Made in Indonesia, not in China as nowdays so workmanship is reliable

-
all the volume and tone pots were noisy when I turned them, so it must be changed

Jackson JS30WR Warrior
4
I got this guitar from gak.com for £200, but its normally £280. I got it cos its a jackson, and its a whole lotta metal! its pure shredder!

Its got a phat neck, really smooth, and wafer thin, so playin solos is a doddle. The pickups sound really nice on clean, and it has a floydd rose. It is a sexy beast, too. Specially for the price, its a damn good guitar. As good as an epiphone les paul, easily, and a few bob cheaper

Though floydd roses are awsome, they get bloody annoying, and they are sooooo high maintanance. the pickups could stand to be a tad crunchier, but thats just me nit-picking.

couldnt be better, solid body, nice and heavy, everything screwed on tight. sweet.

a damn good guitar, if youve got the money and patience to deal with getting a floydd rose set up. Well worth a look into.

Jackson JS30WR Warrior
4
I really liked the sound and lightness of this guitar, I paid $500 for it.

Even with the Floys Rose on it is still a hard tuner, cant keep it in tune

Jackson JS30WR Warrior
5
I live in Budapest, Hungary. I bought this brand new guitar in a well known guitar dealer in Budapest.I was looking for especially a japan Jackson model. I paid 99000Ft (approx. 400bucks).

I had to choose between 3 guitar: jackson fx fusion, ps4, and js30. I tried all, and that was the real bargain. It's a 2002 model, and the others are much older, and that counts. It has the most versatile sound of all. I play Metallica in general, Hendrix, GnR, RHCP, and other styles as well. It's perfect with a Marshall valvestate in every way. The JT500 floyd rose tremolo is awesome; hard to believe but its true that after 2 month of intensive play, i've never needed to tune the strings. Not at last the guitar looks fuckin' cool.

There's nothing i dont like about it. Maybe it would looked a little cooler with sharkfin inlays (but that is the DXMG model with active EMG pickups).

Quality is all right, tremolo's durability kicks ass -that's important!! Unfortunately it fell down once. It landed on the side of the neck. Nothing happened thank God. My previous guitar was a Les Paul cover, and that's neck bended a bit after an impact. By the way the alder body is very soft, it can be easily hurt. Better be careful.

I'm very happy with this guitar. Easy to play with, nice sound, real Jackson quality. It's good to know that Jackson makes all products the highest quality whether in the U.S.A or Japan.

This review was originally published on http://www.musicgearreview.com
Did you find this review helpful?yesno
»
Read the 7 user reviews on the Jackson JS30WR Warrior »