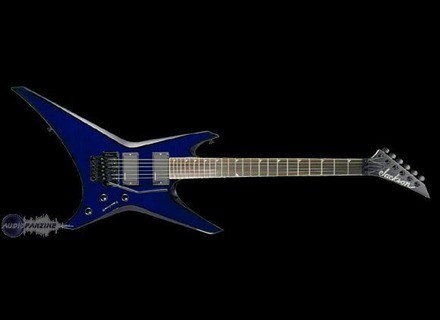 WRMG Warrior (Before 2006), V/XPL/FB Shaped Guitar from Jackson in the MG series.

Jackson WRMG Warrior (Before 2006)
5
In the middle of December 2003 my good old Ibanez RGR565 from 1994 retired from her heavy duty by spitting out the whole Floyd. Due to other damages she had suffered before, I decided to replace her and her RG550 sister. As I actually play in a doom-metal band, I thought the time was right to get some extreme shape. The first guitar that came across my way and met my taste was a B.C.Rich Beast NJ. Great Outfit ! But the U.S. Version is unaffordable for me an the NJ is nowadays made in Korea (in ancient times it was Japan). I tested it and it's nothing but firewood. No tuning possible, badly ballanced,and so on. REAL CRAP, GUYS ...
Thinking back I remembered the Jackson Warrior I had seen once in a ROADSTAR-catalog(R.I.P.), checked the internet for actual models, and found the WRMG.
The cheapest price I found for this babe was at jm-musikland in Erfurt, Germany. It was 690.- Euro
I ordered the warrior on 30th december and finally got it on january 17th (f... amateurs, next time I better import it myself !)


Great license Floyd by Jackson, always stays in tune and as it is a low profile it perfectly meets the feeling I'm used to from my former Ibanez LoPro-Edge, though the Jackson appears a bit worthier. The EMG_HZ Pickups are subject to a lot of discussions on the web, but I really like their clear sound. Could be a bit more agressive for my taste but they don't have to, cause my VoodooValve is able to make them sound like hell and has done the same with weaker pickups. The binding fits the neck perfectly, the strings were so low (without hitting the frets !) that I had to heighten them in order to make playing legato style, especially the pull-offs, more secure. Of course this is a question of taste.
Last but not least the warrior features these incredible piranha inlays which are my favourite inlays from now on. Do I have to say more ? No, cause this is a true JACKSON, so never mind the "made in japan" sticker.

It's packacking is to light. The guitar is in great danger of loosing her life before her virginity.
The Guitar itself is just stunning and if there was something I disliked I wouldn't have bought it. Poor people who buy crap and after that post about it here. Just write: "I was not able to buy a good guitar because I was to stupid (or lazy) for research."
(I must admit I have seen another WRMG with black forest colour and beeing held against the light the finish showed some small waves , but as that babe wasn't my one, who cares...)

I have always been playing guitars in this price category. They have served me well and there have been some nice pieces amongst them: Gibson SG Standard, Gibson Explorer Reissue, Gibson Flying V '90 (all had to leave cause they had no Floyds), Jackson Dinky Rev. Japan, Ibanez RG565 and RG550 and some more...
The Jackson WRMG Warrior clearly beats them all !!! I recently tested an USA made Warrior and the quality was not too different. Of course there was some sort of expensive and exclusive feeling to it but by far not enough for a price difference of 1000.- Euro.
The playability is due to the eytreme x-shape not (as some could suspect) worse, but better than at the average strat body. One could easily reach a 28th fret if there was any.

I should tell you guys to instantly sell your old lady and get this beauty, but as I dont't like the whole world running around with my guitar, I don't, hehe. Get another Jackson Model, it won't disappoint you.

Jackson WRMG Warrior (Before 2006)
5
I bought this unit at Long and Mcquade for 1200 CDN w/case and a few accessories ie. Strap, Stand

Its obviously a bad ass looking guitar, but tonally it has very tight distortion, with average clarity, sits perfectly on knee while sitting down, floating tremlo

6 words, Floyd Rose Tremlo Bites My Bag, also if you're a metal player as I am, don't expect the 20Db boost to help you get a bit of volume for leads because it doesn't do much with any substancial amount of gain

Its solidly built, action is a bit high for my tastes and its a bit heavy but it's balanced well. cutaway is more than adiqute

This is an amazing guitar, i've played it non stop for the last week and there's no change in sight,It works beautifly with my Marshall and i'm completely happy with it in every way

Jackson WRMG Warrior (Before 2006)
5
I bought this master piece Permian Music for about $600. I bought it for the bad ass look and the neck.

The neck plays REAL fast. Its easy to play in the second octave all the way up to the 24th fret.Im an avid palyer and this is a must. And the kick ass look, it looks like it would jump out of the case and tear your balls off.

I like every single piece of this awsome shit!

Pantera is the best fuckin band ever and yall dont fuckin forget that.

Jackson WRMG Warrior (Before 2006)
5
I given this unit for my Birthday and my parents never told me how much it cost.

I like the way it looks like it's ready for anything, Its blue skin shows a great darkness about it, as if it is ready to destroy any opposition it might face ever.

I love this unit desperatley


This guitar is the greatest marvel in guitar history i have evr seen, it is absolutly stunning and whoever see's this great monster should bow down to it in great respect for the designers and makers of this great powerful machine of music.

This review was originally published on http://www.musicgearreview.com
Did you find this review helpful?yesno
»
Read the 5 user reviews on the Jackson WRMG Warrior (Before 2006) »