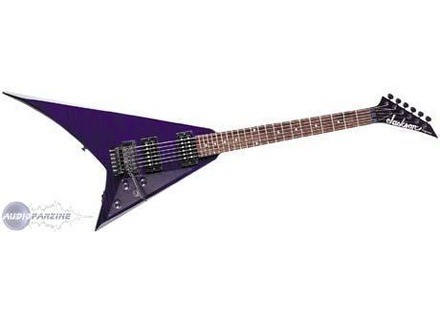 It's very light weight for better mobility, and it sounds great. It has a floyd rose tremolo which I havent had any big problems with

If your looking for a more heavier sound you'll want to change the pickups (I put 2 EMG-81's in mine), also the floyd rose has a type of whammy bar theat you have to screw in like on most vintage tremolo and if you wind it too much you could mess it up.

It's well built and can take alot but being a V naturally you have to be extra careful cause the ends tned to chip easily.

A versatile guitar for many types of music

The handle is very nice, you feel you can play it fast. This is the opposite of a handle LP for example (which has other advantages).

Access to acute is not a diffculties, but that's where the shoe pinches. Guitar made for metalheads, but also shredders then why are there only 22 boxes? Memory, take the Professional series for 24 cases.

Sound: it is very difficult to get a nice clear sound without the bass does come too fat sound. Playing a lot on the volume knobs, it is doable, but you lose the respondent microphones.
on the other hand, this guitar has a distinct advantage when you attack the big sound distortion. I made the comparison with a Warlock Ibabez 1993 and 1997 (both humbucker) and the result is final. The jackson crushes its top competitors hand.
For cons, I find it a bit heavy, it is quick to break your back if you play it for an hour.

I played guitar for 20 years and now I am much more keyboardist, so it does not correspond to my expectations (now I make ambient electronica), but having made of metal for all my years of scratching, it was perfect for my style.

I played with a Marshall 65R and sometimes with a Vox AC30 and a Boss Me-50 effects.

If the tone knob is cut into playing palm-muting, it really leaves very nice sounds.

Attention to the mechanics that move a little. Although the tuning is done at floyd, mechanical take a little game with age.
For someone who makes live tunings (E, D), it can cause concern.

I use it since 2005 and I will sell it under any pretexts. I intend to also buy me a kelly Jackson to complete my set (and even if I do not play metal).

I had a stat 'Fender, Ibanez, a warlock and I also played on a Godin and a gibson LP.

I like its shape, ergonomics and the dish is a real solid handle highway.
I do not like the clear sound a bit hard to get and lifts that move a little, let alone handle 22 boxes.

With hindsight, I would not hesitate one second before I buy one. With Orange TH 30C, it must tear everything.

Lecrokmitn's review (This content has been automatically translated from French)

A well hot distortion that does not sound rough and clear slap a fine, well rounded bass grooovy much everything
on my H & K has sent many a lamp!

I rgal to learn the basics of the game with this pchu just scratching the form that can s'averrer notte not practical to play if RAS is sitting on top!

b-slayer's review (This content has been automatically translated from French)

Jackson PS3T Rhoads
5
all having already been told about it, so I spend my turn.

The handle is it nice?
the handle is nice, but not as fine as that of a pa IBANEZ example, but not overly so late either, it gets worse

Access to acute (last string) Is it easy?
access to acute is easy because of the shape of the guitar, except the heel, but a habit.

Ergonomics is it good (in terms of shape, weight ...)?
Same as above, it is special, but not inordinately different from any other guitar

Are they suitable for your style of music?
sounds are due to micro has the same violin for the guitar, so the EMG is rather neutral, it can do almost anything we want with.

What kind of sound you get and with what settings ("crystalline", "fat ",....)?
see above, thank you EMG

What are the sounds you prefer, you hate?
METAL! everything thoroughly!

For how long have you been using it?
I own a PS3 without vibrato, and I'm tired, so I bought this one because of having the vibrato that I missed, so I played the PS3 since 10/15 years and since 1 PS3T and a half months

What thing do you like most/least about it?
vibrato, at the same time that's why I took

Did you try many other models before getting this one?
What is your opinion about the value for the price?
bought second hand, the price / quality ratio is very good in 150/200 euros

Knowing what you know now, would you make the same choice? ...
of course, my 2 PS3 are a little close to the same generation, ie currents of the 90s, so the quality was pretty good, I do not know the quality JACKSON current so I can not judge on this point, however If you buy one, I recommend instead the PS3T as more complete, if you are a button at all (and soloist rithm) if you are playing in tuning rather low, the PS3 is rather what you need, more simple grant because of the lack of floating vibrato, of course, these judgments are for me and not necessarily for you, the easiest way is to try them.