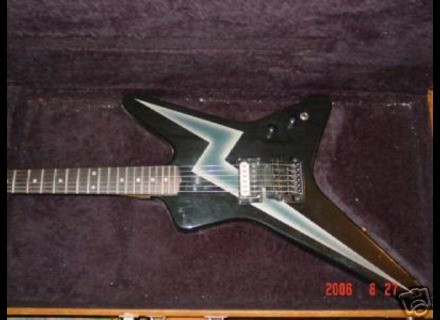 Kramer voyager lightning star 1981
5
I bought the guitar about 18 months ago from america. It looked brilliant and I thought it should sound great, as most of the reviews I read were very encouraging. It cost me $450, plus $75 postage and $90 for a case.

I love the looks, but it also plays brilliantly. It has better sustain than I've ever heard on a guitar before, and the switches between 3 pickups allow loads of versatility. It also has a great tremel system and I love the string clamps, that stop it from going out of tune.

The only really annoying thing is that people keep picking it up and playing it - i get paranoid about damaging it.

Great quality, no crcks breaks dent or mould lines. I think it will play just as well in ten ears as it does now.

A fantastic buy. Well worth the money. If I lost this guitar and I had to buy a secondhand one, I would happily pay upto £350 maybe even £400