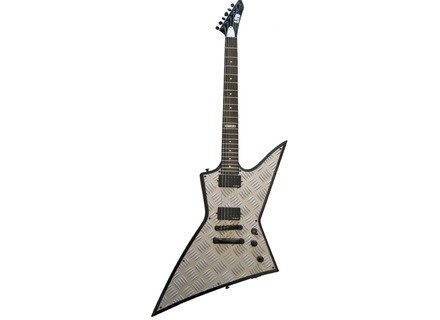 
Iam:??
Artist Name:Black Label
Amps:Laney Hardcore 120 H
Cabinets:Behringer Ultrastack
Thats me!
THe guitar has a very very very great HEAVY sound i play Nu and New Metal and when you play it too,this Guitar IS FOR YOU.
The Clean sound is veryvery great you think you are in the heaven

The quality is very GOOD the plate is like Aluminium and it look like a silver AXT.
the built and the sound quality is like A TANK

Buy this GUITAR you can all do with it if you play CLASSIC COUNTRY JAZZ OR BLUES THIS GUITAR ROCK hard BUY IT the price is a little bit expensive but when you have the GUITAR you LOVE THE SOUND AND THE BUILT QUALITY and BLACK LABEL thats ME!!!

This axe is for serious rockers. I replaced my old epi les paul with this, and it is awesome. Alot of weight, so the sustain and balls of the sound are great. Great playablity, with and awesome feel. It comes stock with the EMG HZ's, which are good for standard passive pickups. The clean tone through the neck simply sings, while the bridge position distorted its completely evil.

There really is nothing about this guitar I don't like...The finish is awesome, and you'll get some serious looks with it on you. If you are a lightweight, it might be a bit heavy for you, but after a while you'll get used to it/get stronger.

Very solid. The set neck is perfect, with a superb angle and a touch of relief. The wiring behind is also neat and strong, I'll never worry about anything wearing out. The fretboard is very smooth and polished, as well as the extra jumbo frets (the are tall). Its been dropped and doesn't even care- this guitar would take anything!

This is a finely crafted instrument. For the money, I don't think it could be beat. And the andonized aluminum diamond tread rocks!! (and its real)

LTD EX-351D
4
I acquired this unit off the Musicians Friend website. It was a scratch and dent item, and I paid $350 tax, shipping, and all. An excellent deal in my book, b/c the guitar was in great shape. It only needed some basic work, such as filing and buffing the frets (due to tiny cuts from something), and filling in some tiny cuts in the finish.

Ok, I've heard a lot of people say that these guitars, along with the Gibson explorers, are very neck heavy. The gibson's are, definitely. The ESP's are not nearly as bad, because of the smaller body (love that). Also, the neck is very smooth and fast. Action was exactly 1/16", and intonation was nearly perfect. I've also heard people say that the emg-hz pickups suck. Yet again I disagree. You have to consider that these pickups are made for ROCK, for which they have an amazing sound. No noise, and great tone. The pickups in this guitar are a set of h-1's. Go check 'em out at emg's website (www.emgonline.com). They are great pickups, but still, you can't beat a set of emg-81's or 85's. I may upgrade soon, but I'll definitely save these and put them in another guitar. Great overall guitar in all aspects. Built very solidly. I would say that the higher-end esp ltd's are some of the best korean guitars made.

I only have one dislike. The higher strings pass over the nut at an angle which I think is somewhat too small (something to hold them down lower would be nice). Other that that, you can't be this guitar for $550 (musicians friend standard price), and espceially for $350.

I have yet to find a major flaw. The is one place on this side of the fretboard where the finish has a tiny crack due to the side of a fret, but that's all. Very solidly built guitar.

Overall, I give this guitar a 4, b/c it has excellent playability, sounds great, and doesn't hurt your back like a gibson. I would stay towards the higher-end ltd's though, b/c the lower end models tend to lose quality quick. Excellent guitar.

LTD EX-351D
4
I bought it at Axe Music for around $900 canadian; I needed something better than my Cort G.

I love the way it looks. Most people complain about not being able to get the old gibson style explorer from ESP anymore, but I think this one looks a lot better. It doesnt sound too bad either, for the heavier stuff that I play. It stays in tune quite well too.

It's neck heavy; It constantly is diving on me and it's so annoying. I think if you relocate one of the strap buttons it might help a bit though.
The pickups are horrible. EMG-HZ, not very good. Very bland sounding.
I also dont like how fat the neck is. I used to like that, actually I still do for some light rhythm playing but now that I try to play a lot more lead guitar, it's getting in the way a lot, I find. The heel gets in the way a lot if I wanna do some sweeping at the really high frets too..so it looks like I need a neckthru.
The action was set way too high for me too, when I first got it. I don't think it's a big deal though, since all you have to do is turn a couple screws to lower it..but still, it was annoying at first.

This thing was made by Samick in Korea, as all LTDs are. "Mahogany" body (its not the good mahogany...), maple neck, rosewood fretboard. Tune-o-matic bridge, and some sort of fake looking diamond plate on the front of the body.
I am really satisfied with the quality of this thing, even though it's not really the perfect guitar for me. Yeah, it's made in Korea, but I think ESP gives them decent specs to build em by. I havent had any problems with this guitar whatsoever, other than some minor fret buzzing because I set the action quite low, and I probably need some heavier strings on it.
For the midrange/cheap guitars, I don't think you can beat ESP for the quality you get for the money. You'd never see me touch a cheap jackson or bc rich. (expensive ones are a whole different story though).

This was my second guitar and it's served me well, but as I expand my playing more I'm finding this guitar quite limiting. Despite crappy pickups, it sounds decent for what you pay for. It looks great, but looking back, one shouldnt buy guitars based on looks.
It's a good guitar as long as you're not doing any shredding; it's not a guitar for playing Yngwie songs.

This review was originally published on http://www.musicgearreview.com
Did you find this review helpful?yesno
»
Read the 5 user reviews on the LTD EX-351D »