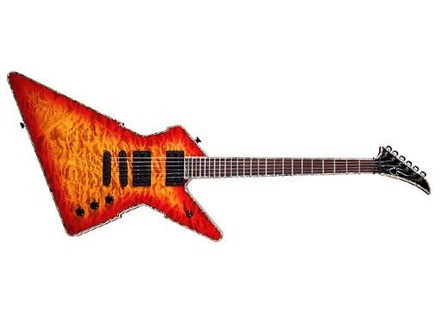 Peavey Rotor EXP
4
I play mostly rock music. like Rage against the machine, Metallica, Alice in chains, system of a down. I have been playing guitar for about a year but it was only a few months ago that I started aquiring an interest in playing my own riffs. I have had no luck getting into a band so I dicided to create my own kind of music and will attempt to go solo. in the mere future

I ordered this guitar from st.johns music I think itwas around $450.00 CDN funds in Edmonton. The Reason I bought it was because I was wanting to learn off music from Tom morello (Guitarist of Rage Against The Machine). But since he uses a guitar with a 3-way switch and has two volume knos and one tone I was left looking for for a guitar that had roughly his setup, I finally found it in the Rotor EXP.

what I like about I can't think of anything I don't like about it. Flyodd Rose bridges are fun to use ispite their critics there is so much you can do with them. The other thing I like about it is the neck is comfortable to use. I am able to do that toggle effect similar to Tom Morello. what else can I ask for.

well the weight is a factor I'm not too crazy about the pickups could be better but I may get them changed for better one latter in life. despite the cool shape of the body it is a pain in the ass to stand up since it is not designed for that purpose so instead I had to get a stand to have it stand up straight.

The construction is well crafted. and is comfortable and I haven't had any real problems.

all in all for $450.00 it's a real good guitar I may just buy another one for a backup if I go on stage but other than that this one is a keeper.