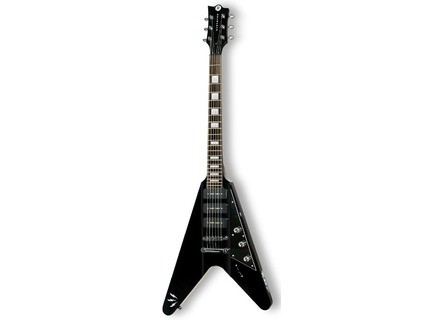 All user reviews for the Reverend Ron Asheton

georges-le-yeti's review (This content has been automatically translated from French)" Reverend rock!"

Reverend Ron Asheton
5
Sorry, but I started a few months in this world, so I'll give you my opinion of a beginner. Guitar made in Korea (the oldest models are reverend U.S.), proto-punk guitar, few models exist and each is set in a different way.
It was 22frets.
Regarding the microphones were 3 p90's (so a single winding) at different height level.
you can switch between 5 and 3 mic position pots are available, volume, bass contour (Reverend specialty seems to me there) and the tone.

I am changing from a conventional to electric so yes the handle is always more pleasant enough but not too late more.The 'access to more than treble is correct given the shape of the guitar.
What is the weight when I played standing up, after one hour of play I start to feel weighing on my shoulder. (I am a fellow)
Caller and sitting between my legs I can play for hours. Guitar balanced but not very light, good not great either.
Edit of Tuesday, June 15, 2010: The handle is rather late and fast adjustment of the ropes and after comparison.

I played everything, in all cases I try. I think for too heavy trash metal guitar does not follow (to follow) I think the guitar will tend towards its a little too rough (or so it comes from the pedal). For the blues is cool, we roll off the bass contour, it turns postion high / medium for microphones and some say that it has a sound fenderien, with the peculiarity of p90's that are the Reverend and any form his character.
I play a Peavy TransTube 40w, and the sound is deep clean
in drive is gross desire to sound beautiful colored (the reverend character) and leaves me so schotché! we can also for example the same chopper that his AC / DC and then push audela.
I currently testing a ProCo Rat distortion that I make (via GGG) and the sound is fat enough to see too mushy. When you attack the strings played much tougher AC and AC flies fat / big crunch to the distortion.

In terms of knobs, I play with at the beginning and I did not find its proper setting in my amp, my tuning pedal and my guitar settings but once we found and that we ' there is is pure happiness of creating these sounds.

I have this guitar for 5 months and as stated above I do not know a lot of guitar.
It is a guitar that I pay in 700euros (with shipping from the U.S.) Who is rare in France I believe. With hindsight yes I will take this guitar. However I am démmerder to buy elsewhere than in the U.S. (There are 2 or 3 distributors in France) because I do not appreciate receiving the guitar package. (Be careful if you order at the expense of U.S. Customs)
Models sold now are Korean and reviewed / set in U.S.
The name is Ron Asheton signature is the model of the late guitarist of iggy pop. (The stooges) played it over in his last live in Detroit I think he said.
I suggest to people interested in coming Reverend models tested in the south.
I takes only 9, because perfection does not exist but it tends to 10.

Another detail: the boxes for me reverend does not seem to be very good bill. Wrist seems a bit fragile, and the finishes are top but it is only the box. Therefore I strongly recommend a box of another brand.
Even though I have no problems with yet. Stay tuned.